In Sept of 2016, Idaho became the 49th and final state we entered, achieving our goal of visiting every state and adding the last one to our map.  Back then we got a taste of Idaho’s natural beauty while camped at Coeur d’Alene up north, but we were excited to be back now to see much more of the state.

Our home base was in Filer, at Twin Falls County Fairground RV Park, and we were happy to have the quiet place practically to ourselves.

After several stops at noisy and busy parks, this was more like it!

Magic Valley was constantly mentioned in the local weather forecasts, and we realized we were in Magic Valley.  But what’s so magical about this area?  Siri advised me that we were camped in one of the 8 southern Idaho counties that comprise Magic Valley.  It was named after the early settlers who built dams and irrigation canals along the Snake River to create productive farmland and towns that seemed to magically spring up out of nowhere on the sagebrush-covered southern Idaho desert. 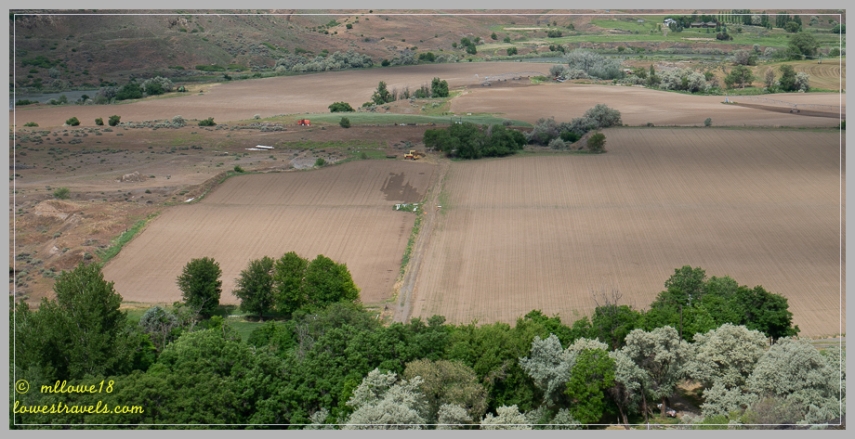 Farmland in Hagerman Valley, they must have just harvested the famous potatoes here

The Snake River is in the heart of this region, and what the early settlers built also resulted in the reservoirs becoming recreation havens.  The river cut through ancient basalt lava flows, forming the Snake River Canyon which is a mile wide and 500′ deep in some spots. What’s so unique and special about this rugged canyon are the numerous waterfalls pouring out of its sheer basalt walls, creating a dramatic background that extends for more than 50 miles.

It was along Thousand Springs Scenic Byway from Hagerman up north to Twin Falls that we saw dozens of these springs/waterfalls surging over the canyon walls.  We also noticed a mix of geological features resulting from the Bonneville Flood, along with miles of beautiful rural farmland.  It actually was kind of magical! 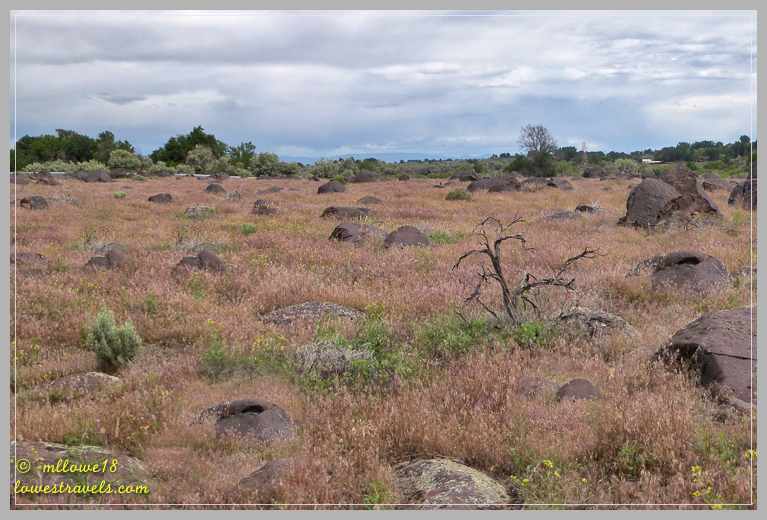 These partly rounded basalt boulders were deposited in Hagerman after bouncing along the Snake River during the Bonneville Flood.  They’re called Melon Gravels

The valley around Hagerman contains the largest concentration of horse fossils in North America.  It’s being protected by the Hagerman Fossil Beds National Monument because it holds the world’s richest known fossil deposits from a time period called the late Pliocene epoch – about 3 to 4 million years ago.

Had the visitor center been open, I would have learned more about the area’s history and paleontology.  But I had to settle for this photo of the monument from the Snake River Overlook:

Hagerman Fossil Beds National Monument from across the Snake River

Twin Falls sits on the south rim of the Snake River, the largest city in Magic Valley.  It’s also known as Idaho’s own “City of Waterfalls”, from the broad crashing waters of Shoshone Falls to the smaller rapids along its outskirts.  The best way to enjoy the panoramic views and interesting facts of the canyon is to follow the 10-mile Canyon Rim Trail.

We did it in two walks; first going east from the visitor center to Evel Knievel’s historic jump site, and on another day walking from a parking lot to the west of the visitor center back to the bridge.  Then we walked both ways across the Perrine Bridge before visiting Centennial Park at the bottom of the canyon.

What I learned as we gazed into the deep, scenic canyon is that Snake River Canyon was actually sculpted and shaped when Utah’s Lake Bonneville overflowed about 17,500 years ago.  It was one of the largest floods to ever occur on Earth.  The 70 mile-per-hour deluge plucked huge boulders from the basalt cliffs and gouged out channels along the canyon floor.

An unnamed waterfall on the canyon wall

Pillar Falls in part of the rapids

Lunch with a view of Shoshone Falls

It was here in 1974 that Evel Knievel unsuccessfully attempted to jump across the Snake River Canyon in his Skycycle X-2 rocket.  The dirt ramp built for that jump is still here, and we stood on it while marveling at the scope of the stunt. 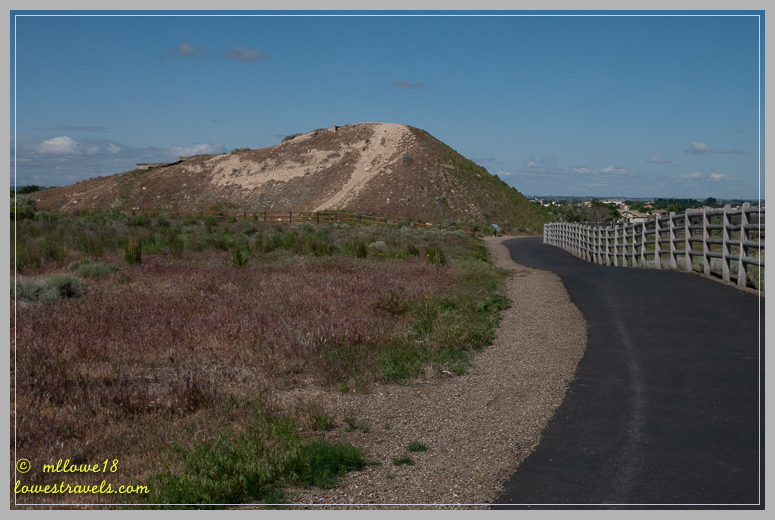 The hill that Evel Kneivel built

Perrine Bridge spans the canyon nearly 500′ above the Snake River, and is a hot spot for base jumpers from around the world.  It’s the only location in the U.S. open to legal BASE jumping year-round.  We saw many jumpers preparing during our visit, but never actually saw any of them take the plunge.

We walked across Perrine Bridge, can you spot the kayaker way down there?

Here’s what the BASE jumpers see as they jump.  I don’t think so!

A kayaker approaches the canyon wall 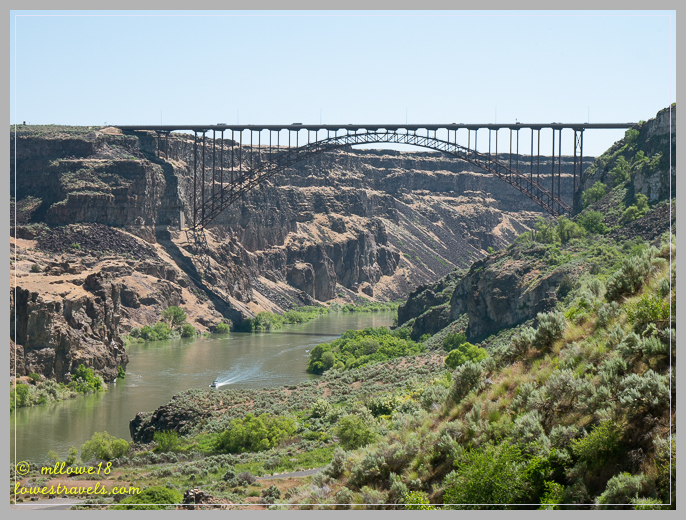 On the day we followed the path from the west end parking lot toward the visitor center, we passed through residential areas with gorgeous canyon views.  It was unusual to see the Canyon Springs Golf Course and Blue Lakes Country Club down there at the bottom of the canyon. 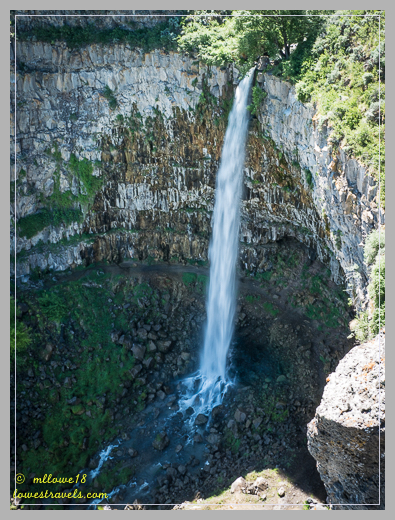 Perrine-Coulee waterfall viewed from the path

Touching the water, one of my rituals! 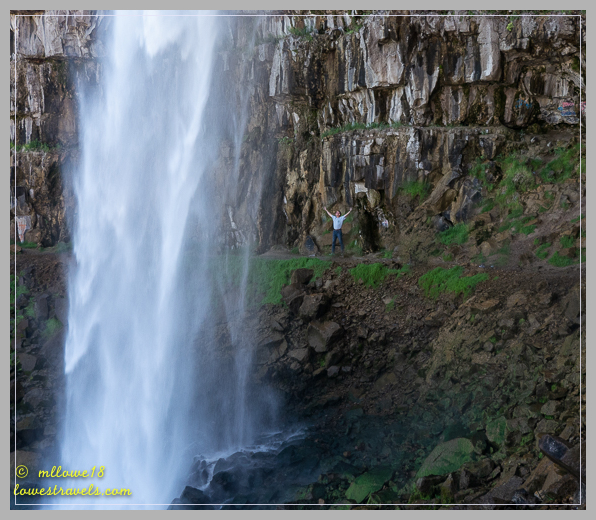 Steve cooling off behind the Perrine-Coulee Waterfall

To complete our visit in Magic Valley we drove east of the Snake River to see two waterfalls that were created as a result of the Bonneville Flood.  Our first stop was to see the namesake of the city, Twin Falls, which was named when there were originally two parallel falls on the river.

The power plant was built on one side of the falls, and Twin Falls Dam altered the falls by diverting the flow of the Snake River into a single waterfall.

Twin Falls with the power plant on the right side

The premiere attraction of Magic Valley is what is being claimed as the Niagara of the West, Shoshone Falls.  Having been to Niagara Falls, we were intrigued with the reference and pretty darned impressed.  Shoshone Falls is 36′ taller than Niagara Falls, with a 212′ drop that cascades over a broad series of rocks. Because we visited here during spring with high water flows from snowmelt, the tremendous volume of water lived up to its nickname.

That house on top of the cliff has a million dollar view of the falls for sure! 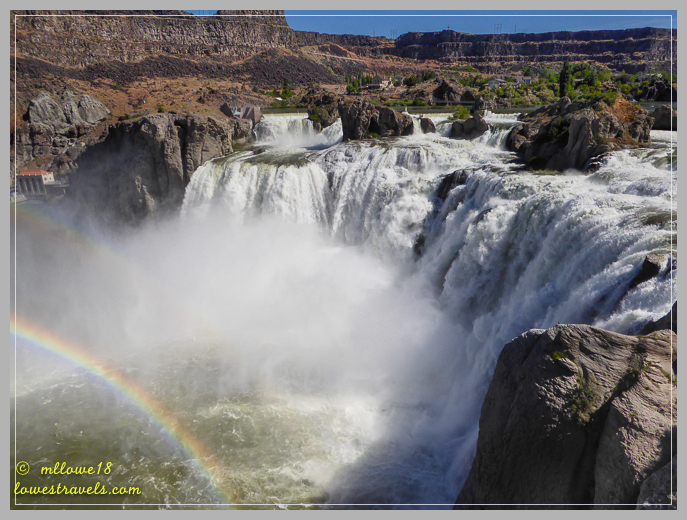 A double rainbow at Shoshone Falls

Our first stop in Idaho was definitely impressive.  The Snake River, the vast rural farmland and the dramatic Snake River Canyon made Magic Valley a great place to visit!

Categories: Idaho, Where we have been