First off, a big THANK YOU to everyone, family and friends who have reached out to us, left supporting comments, sent texts and private messages extending warm thoughts and virtual hugs for Steve.  We continue to feel the positive vibes from prayers sent our way and we couldn’t ask for more.

Just when my stress level was at an all-time high after Steve’s operation, Jim and Diana of exploRVistas arrived in Tucson to give me a warm hug and much needed emotional boost. It was our first meeting, and they came at the right moment.

With Jim and Diana

Steve had a 4-hour minimally-invasive robotic surgery that went well.  He was so curious about the robotic surgical system da Vinci used for the surgery that he talked the surgical team into showing him the machine before they put him under.  We learned that the da Vinci system is named in part because Leonardo da Vinci’s study of human anatomy eventually led to the design of the first known robot.

Steve is taking it one day at a time.  With the challenge of surgery behind us, we still have a long way to go.  In a few weeks he will begin his radiation therapy to kill the bad stuff that the surgeon could not remove from the base of his tongue.  At this point we’re glad that chemotherapy won’t be needed – he gets to keep his hair!

Following surgery we take twice-daily walks around the RV park

What this means is we’ll be in Tucson through the summer.  It may be sizzling hot here, but Betsy is parked under a towering 28′ high “Power Parasol” solar system, keeping her in the shade at all times.

Betsy is comfortably tucked in under the solar arrays

The reward for being in southern Arizona beyond winter is that we get to experience the progression of the desert wildflowers in bloom.  So while we were in waiting mode for Steve’s doctor appointments and surgery date we hiked daily to enjoy the remaining cool temps and desert landscape. 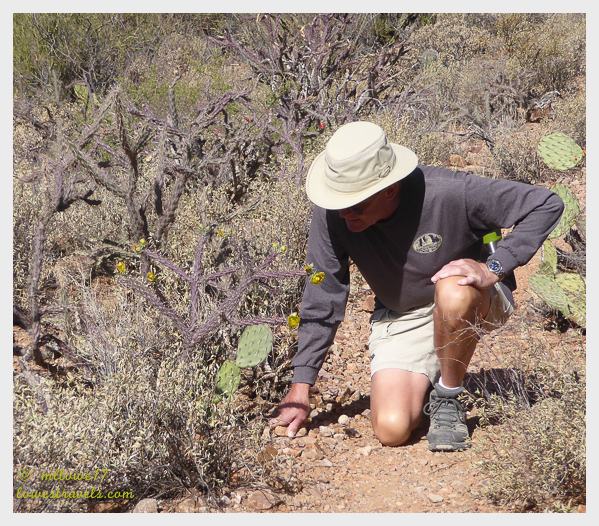 We would usually miss seeing these flowers, as we would be somewhere north by now. Unlike other wildflowers, cacti don’t bloom together in great masses of color.  Different species dominate at different times and vary in their showiness, depending on weather conditions. 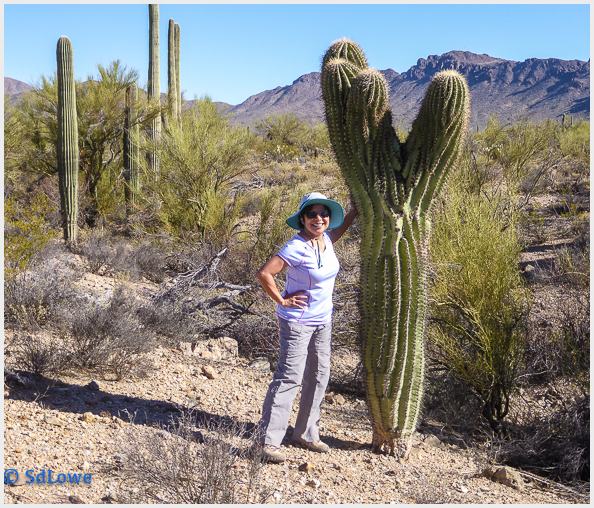 Beyond this point the post becomes flowery, so if you don’t like flowers or cactus now is the time to end your reading 🙂

In  March the Ocotillos were showing off spikes of crimson red flowers, to the delight of many birds: 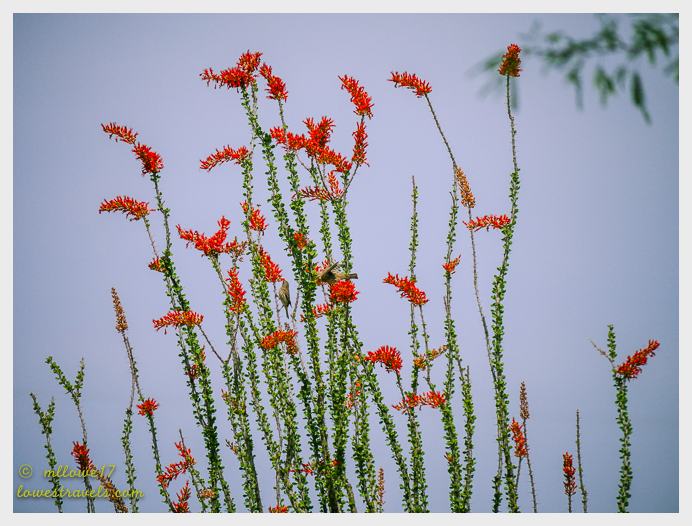 In early April, the Palo Verde trees turned the Sonoran Desert landscape into a sea of yellow, covering the area with dense blooms: 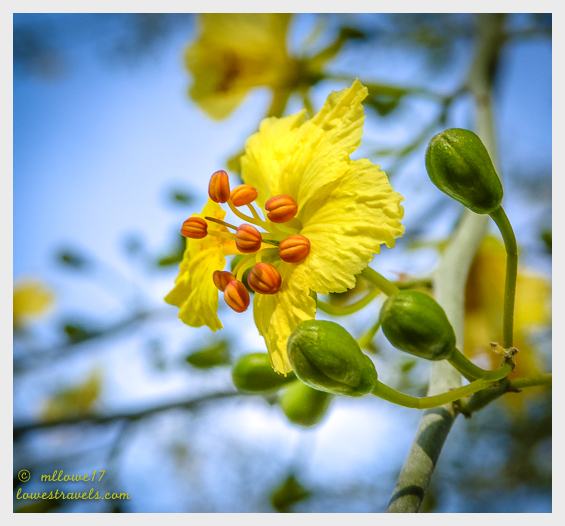 The yellow creosote bush blossoms from late February turn into white wooly seedlings ready to be scattered by the wind: 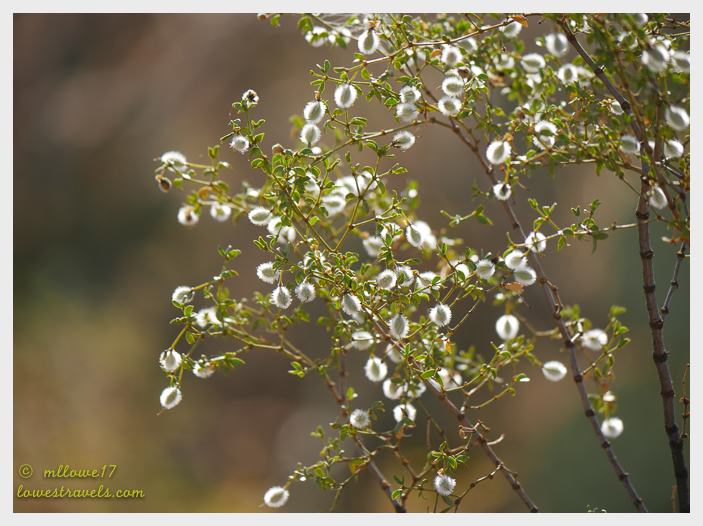 Each time we followed a trail we were amazed how plants as spiky and homely as cacti produce such spectacular flowers.  The first one that caught our attention was the Engelmann Hedgehog for its bright beautiful fuchsia flowers: 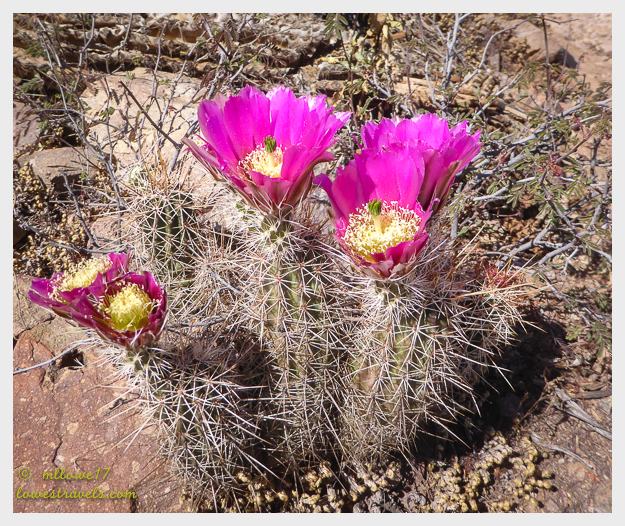 The Prickly Pear were showing their best as well: 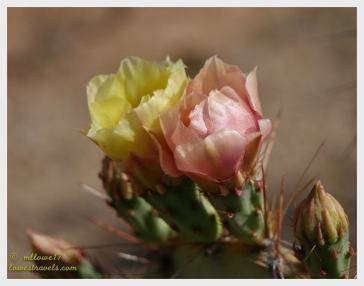 We’re seeing many colors in the desert in mid-April.  The Chollas are starting to display their blooms that range in color from bright red to yellow, pink, green, orange and peachy hues.  During our hikes in past years we never saw a single bud, much less a flower, and we just overlooked these Chollas as just another thorny desert plant.  But this spring we stopped, scrutinized and admired their colorful flowers.

The fuzzy Teddy Bear Cholla has a yellow-green flower

The top section of this Staghorn Cholla had red flowers, while the lower half had green ones

On the trail we came across the various hues of  Staghorn Cholla blooms: 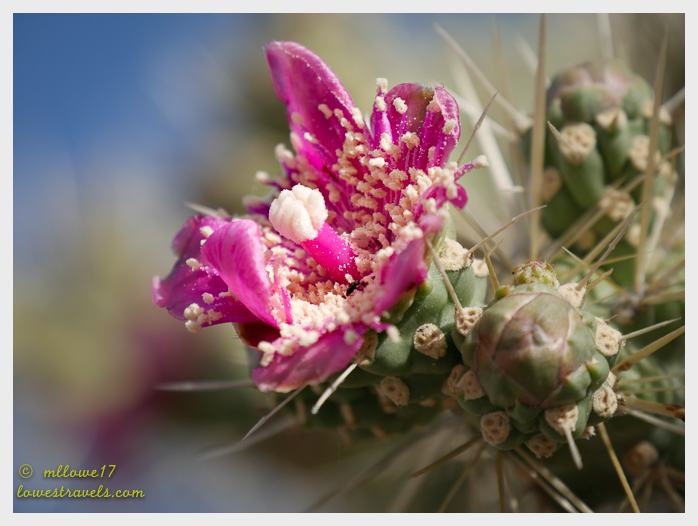 And now in May, the Ironwood Tree unfolds its beauty with lilac-colored blossoms which are abundant at Tucson Mountain Park. 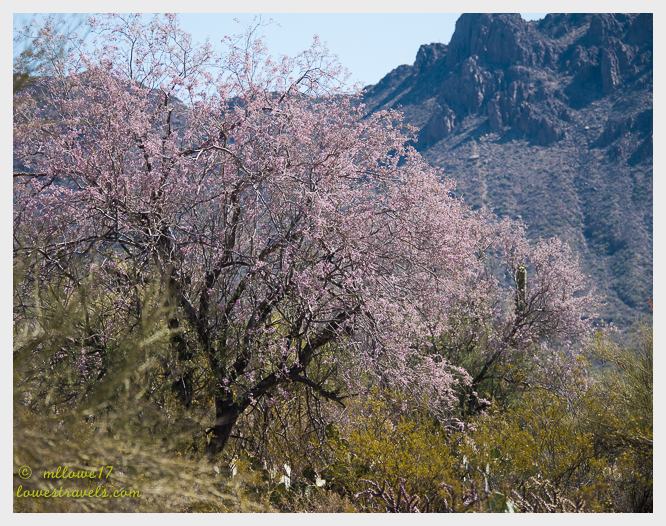 The Sonoran desert is alive with splashes of colorful desert flower blooms in the spring.  But admiring this beauty comes with a caution.  As temps warm up, the rattlesnakes that have been dormant are awakening, and one of them was waiting for us on the trail:

His appearance reminded us to stay alert!

Next up:  The superstar of the Sonoran Desert