As you may have noticed I’ve been absent from the blogosphere recently.  Once again, blogging and reading friend’s blogs must take a back seat.  Our days here in Alberta, Canada have been a marathon of fun, and tapping keys on the computer just hasn’t been happening 🙂

I’ve taken many pictures of the stunning Canadian Rockies for all to view and enjoy in my future posts.  For now let’s take a train ride!

While perusing the exhibits at a railroad museum in Winnipeg, Manitoba last year (that story here), Steve saw a picture of a beautiful passenger train chugging through the stunning Canadian Rockies.  He couldn’t quit talking about it, and a year later here we were in the Rockies taking the dream trip that he had booked several months ago.

I wasn’t that excited about the trip at first, as I had ridden passenger trains to work hundreds of times during my working life.  But when he showed me the route and the promise of indulgence and relaxation, I was “all aboard” with the idea.  And it gave him a break from driving and cooking for a while! 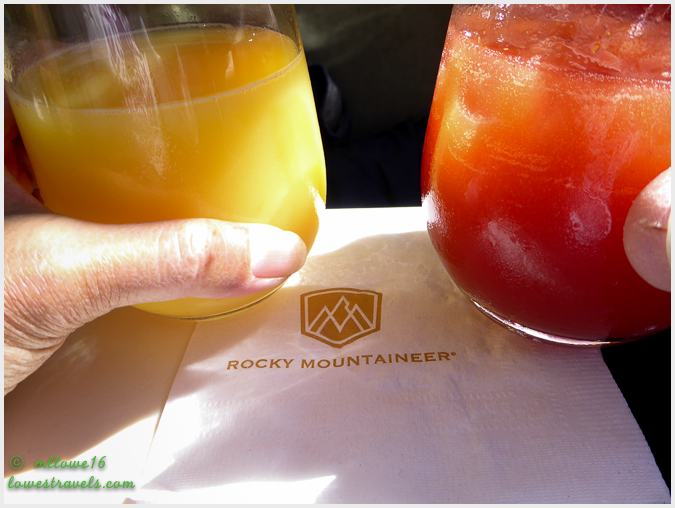 We left Betsy parked at Bow RiversEdge RV Park (Steve’s review here) in Cochrane, Alberta, and boarded a plane to Vancouver where our getaway would begin. 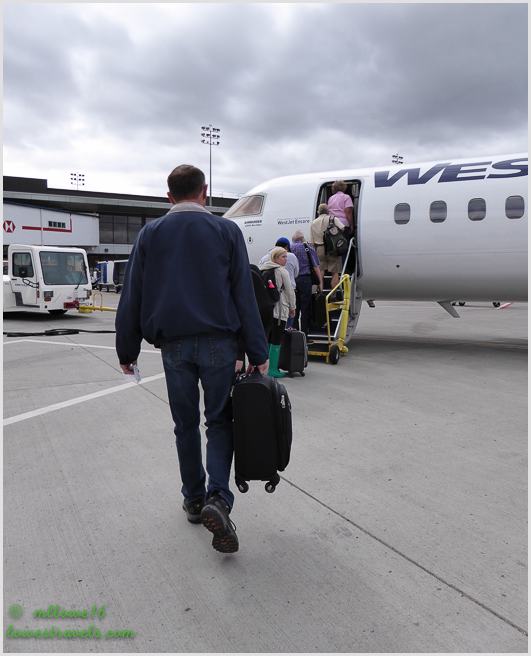 Steve’s first commercial flight in quite a while

We had visited Vancouver in 2012 – those blog posts are here and here.   With only a few daylight hours left when we arrived, we hustled to Harbour Center, where we used our voucher to see the city from 553′ up.  At the observation deck we had a 360° view, and although it was already twilight I managed to get some decent pictures. 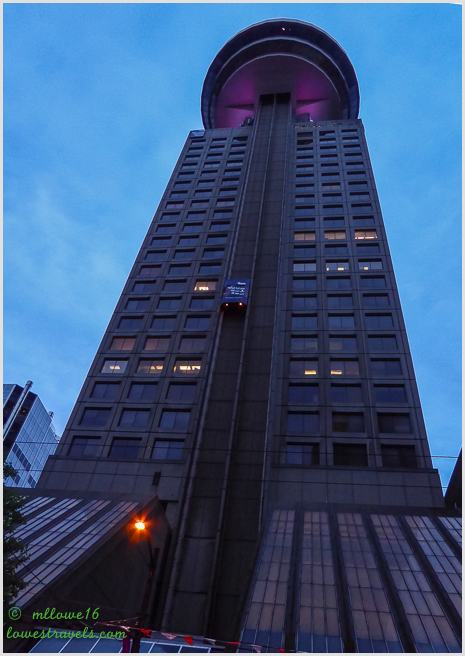 An outside elevator took us up to the Vancouver Lookout

Burrad Inlet and a hazy view of West Vancouver 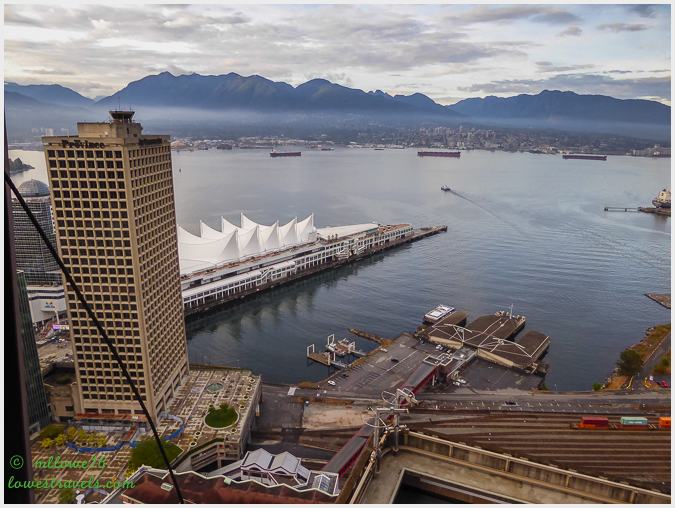 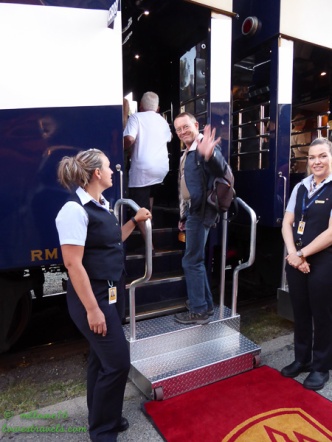 He’d been waiting a long time for this moment!

The excursion we chose was a two day, one way First Passage to the West aboard the Rocky Mountaineer.  This route retraces the historic Canadian Pacific Railway’s route famous for uniting Canada by connecting it from east to west.  Boarding the train in Vancouver, we made an overnight stop at Kamloops and completed the trip at Banff on the 2nd day.  We chose the Gold Leaf Service so we could enjoy the luxury and comfort of a glass-domed coach with full-length windows. For the hotels we downgraded to the Silver Leaf Service, which saved us quite a bit of money and still provided very nice hotel rooms.

The awesome service began the moment we checked our luggage and hopped on the bus that took us to the train station.  This was our first experience having luggage transferred directly into our room at our next stops, and we liked it a lot!  They even gave us our room keys on the train so we didn’t have to check in at all.  Loved it!

We were sent off in a festive mood

Gold Leaf Service – this is the way to experience the Rockies!

The trip was superb, thanks to our coach hosts Pete and Shino.  They totally spoiled everyone, and also provided a colorful narration for the natural drama unfolding outside the windows.  In addition, we got a copy of the Rocky Mountaineer Mile Post, which featured a route guide listing points of interest along the way – referenced by mile posts.  It also explained information about the train, the history of the route, and the wildlife that we might see along the way (and we did see a bear, a couple of Bald Eagles and many Bighorn Sheep). 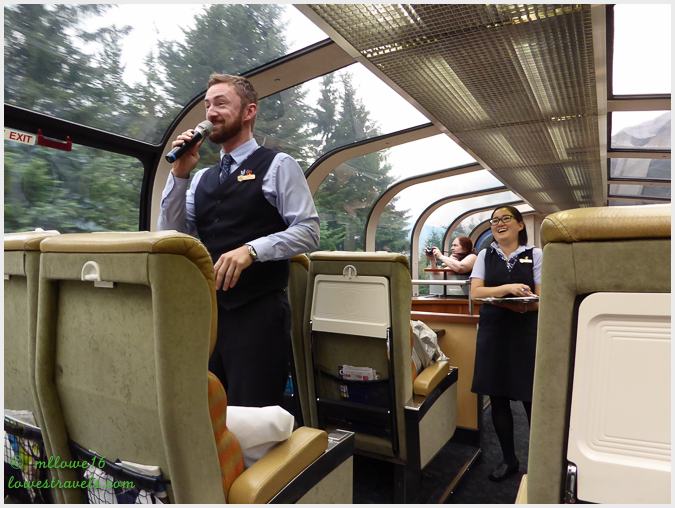 Pete and Shino were amazing

Downstairs in the dining car, Candace and Lynn made sure our tummies were always filled with yummy food and drinks.  Between meals we were plied with all the drinks and snacks we wanted.

Fill it up, I’m not driving!

Here’s a sampling of our excellent main courses freshly prepared in the kitchen and served on real china: 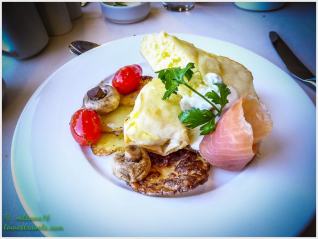 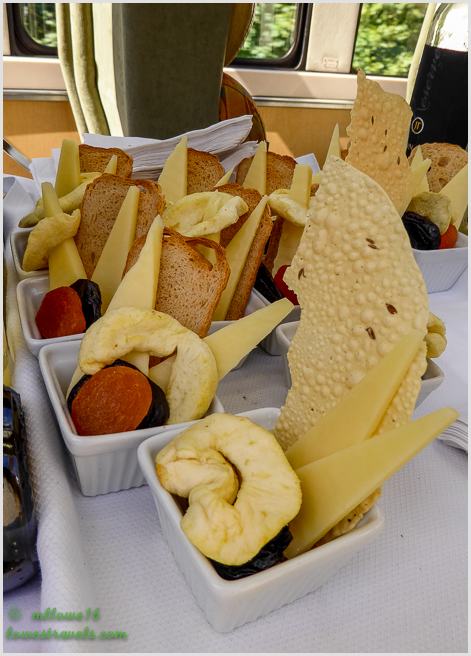 Cheers to our new friends, Rocky and Marsha.  Rocky is a pilot, so he and Steve had lots to talk about

The first day of our journey took us from Vancouver to Kamloops in British Columbia.  The scenery unfolded from the lush green fields of the Fraser Valley through forests and winding river canyons surrounded by the peaks of the Coast and Cascade Mountains.  We also traveled through the desert-like environment of the British Columbia Interior. 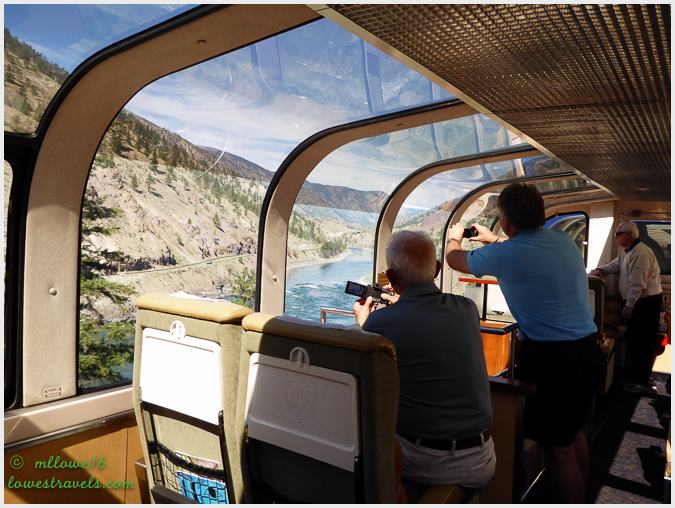 Pete or Shino would advise us in advance of any major photo opportunities, and the train would slow down a bit for us to get a good shot.  The downside was that taking pictures from within the glass dome showed reflections in many photos, and the common vestibule outside the car was always packed with people taking shots from there.

Our greeting party as we completed the first day

Once off the train we walked around Kamloops to burn some of the calories we had ingested during the day. 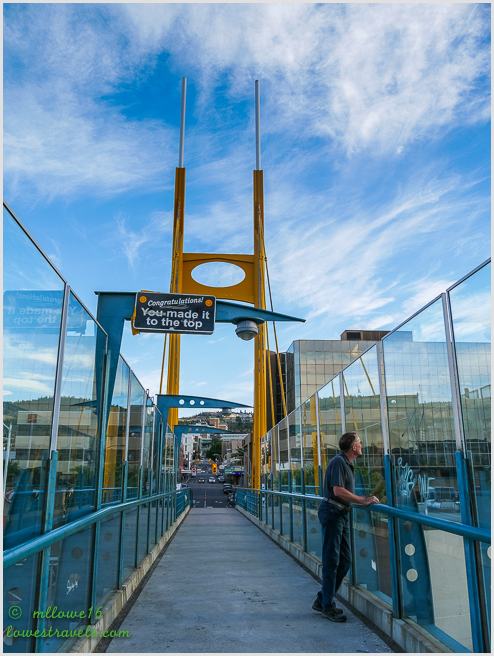 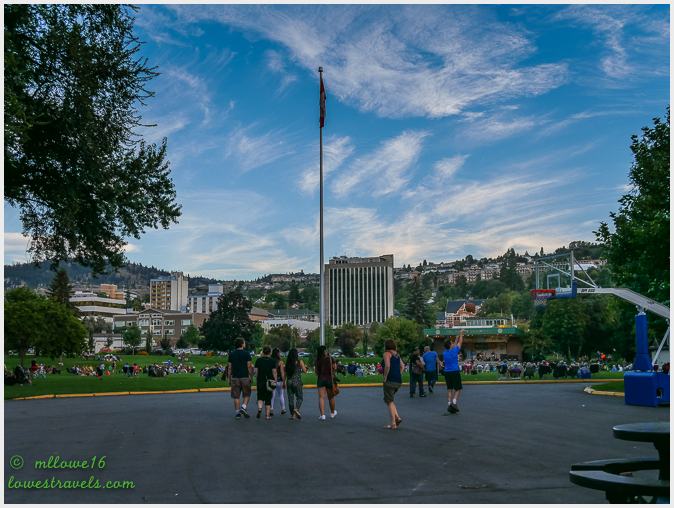 Concert at River Park in Kamloops

A town in Alberta or British Columbia would be incomplete without lots of beautiful flowers!

On the second and final leg of our journey we continued east to our final destination at Banff.  We passed many more sparkling lakes and rivers, and an historic area. 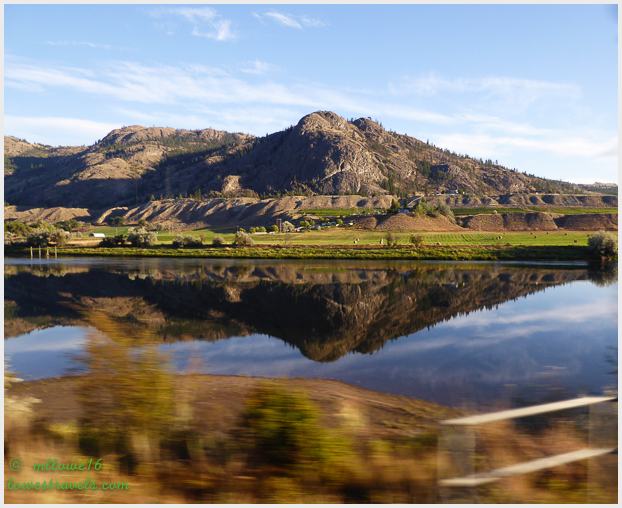 We passed through the spot where the last spike of the CP Rail Line was driven in 1885 at Craigellachie.  If not for the construction of the railway – built between 1881 and 1885 to connect Canada east to west – this dream-filled landscape would have remained hidden to the world. 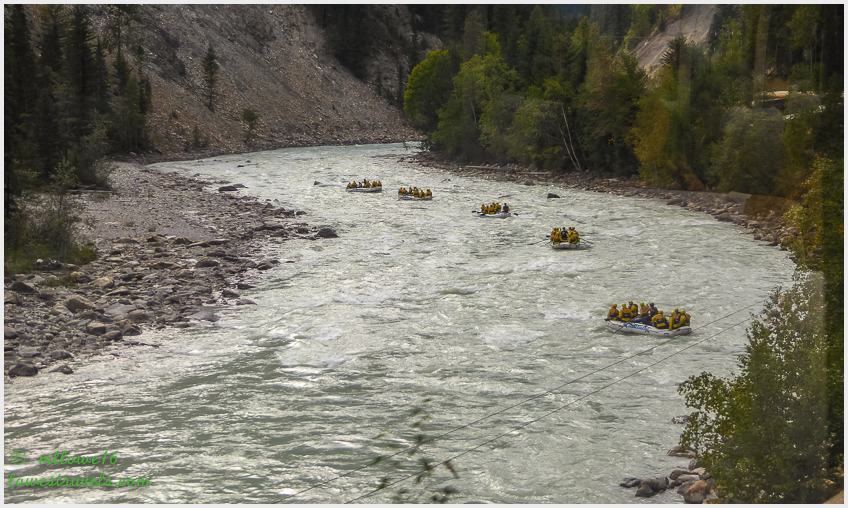 The final section was an area full of railway history, tunnels, bridges and snow sheds. The most interesting part of our journey was when we entered the “Big Hill.”  In 1907, unique spiral tunnels were constructed that took 1,000 men 20 months to complete.  It allowed the climb to be reduced to a manageable 2.2 percent from the dangerous 4.5 percent that existed.  It’s described as a perfect maze, the railway doubling back upon itself twice, tunneling through mountains and crossing the river twice in order to cut down the grade. Pete narrated the entire 8-mile stretch as we traveled in the darkness.

Once out of the tunnels we had crossed the Continental Divide, the highest point on our journey.  This was the boundary between Banff National Park in Alberta and Yoho National Park in British Columbia.  We began seeing glaciers, high mountains and glacier-fed rivers. 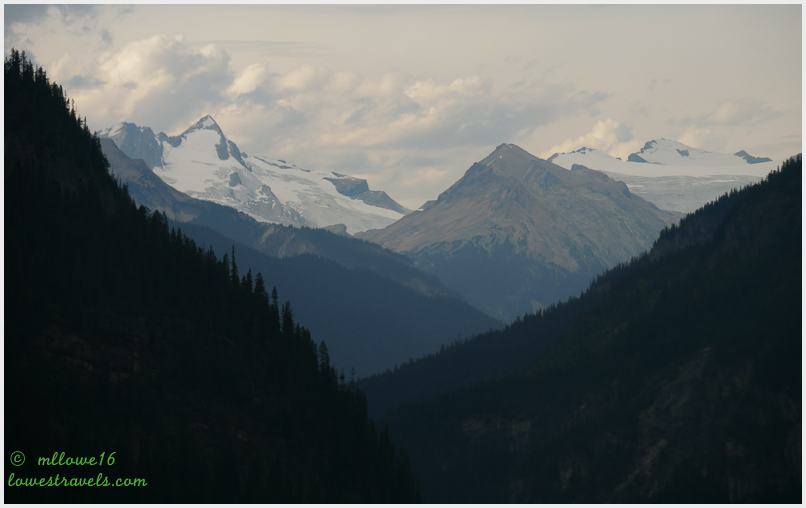 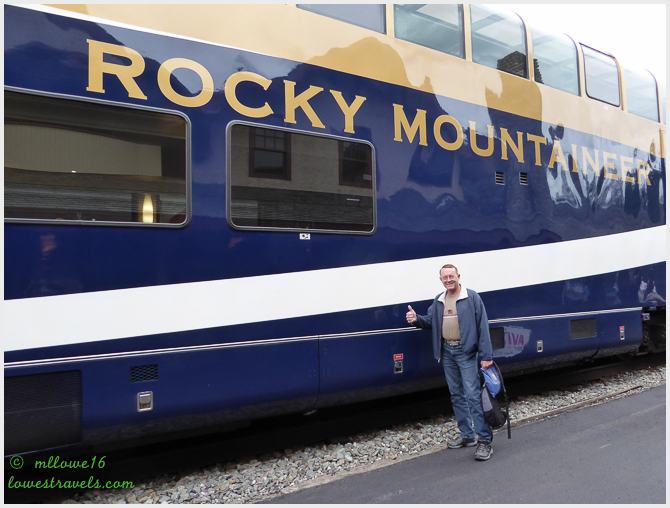 A happy rocky mountaineer gives a thumbs-up to this trip!

We were among 625 passengers aboard 16 coaches.  On board we were surrounded with a team that ensured we had a wonderful journey.  There was a lot of interaction among passengers, especially during the lively commentary from Pete and Shino.  It was a luxury experience that definitely exceeded our expectations.

Arriving in Banff, we extended our stay for two days so we could experience what the town is all about.  Since this post is already long, the automobile portion (actually a rented automobile) will be up next.

Steve grudgingly gets back into the driver’s seat…

Next Up:  Banff National Park

Categories: Alberta, Where we have been