This is the second part of our hiking adventures at Capitol Reef National Park, if you missed it click here  for the first installment.

Another Dirt Road Tour with John and Pam

John and Pam invited us to take another ride in their Jeep to check out some sights along the wild Cathedral Valley district in the northern section of the park.  They keep telling us we should buy a Jeep so we can handle more of these roads, but why should we when we have them to haul us around? 😉 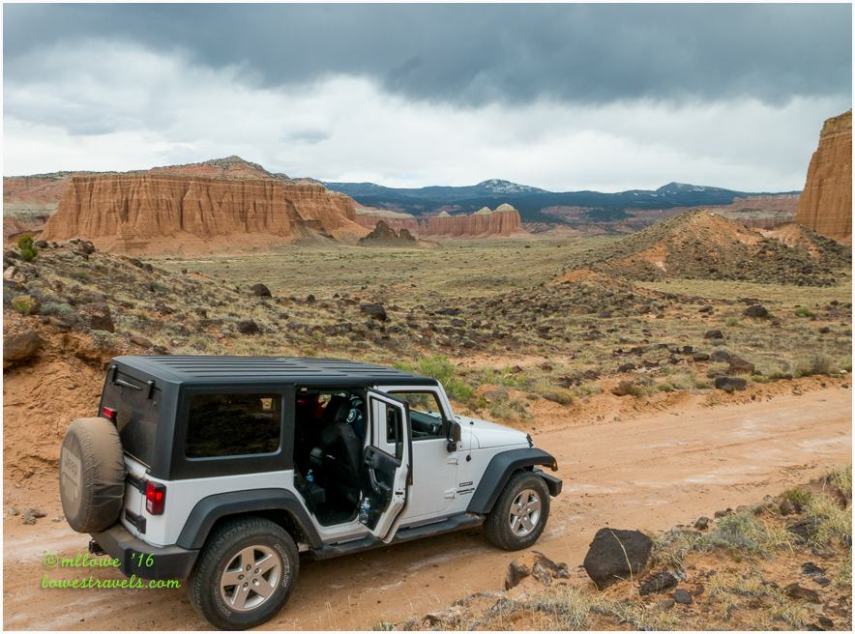 A jeep in the wild with storm clouds approaching – it’s gonna be an exciting day!

They wrote a great account of our fun day at Cathedral Valley, click here to check it out. Although there wasn’t much hiking involved on this day (because of the weather), it was a fun trip with several stops that we found interesting.  Below are my captures from that day: 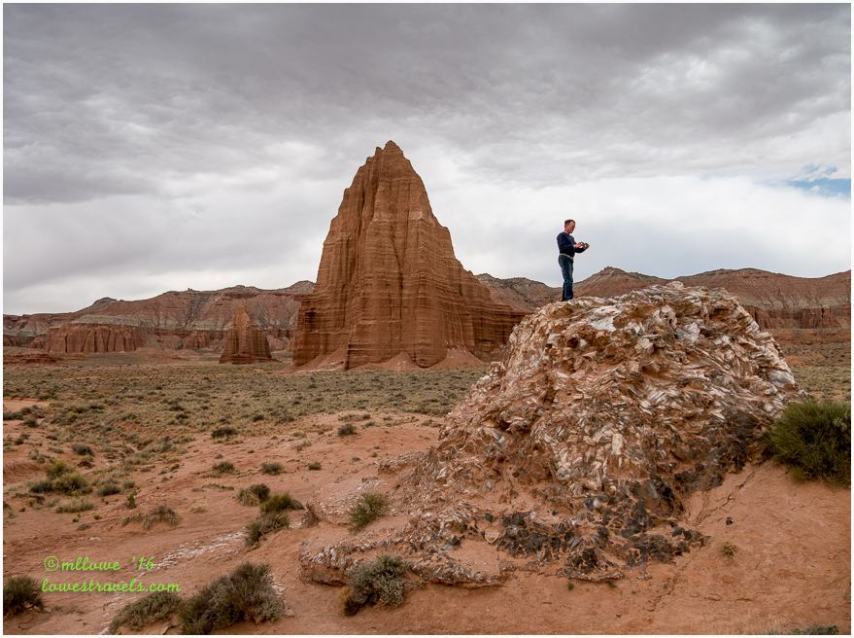 Steve on top of Glass Mountain (really only a mound, but maybe there’s a mountain beneath it?).  Behind him to the left is the Temple of the Sun – the big one – and Temple of the Moon – the little one next to it

This stop reminded us of the Glass Mountain we visited in California in 2012.  It was a huge mountain, click here for that story. 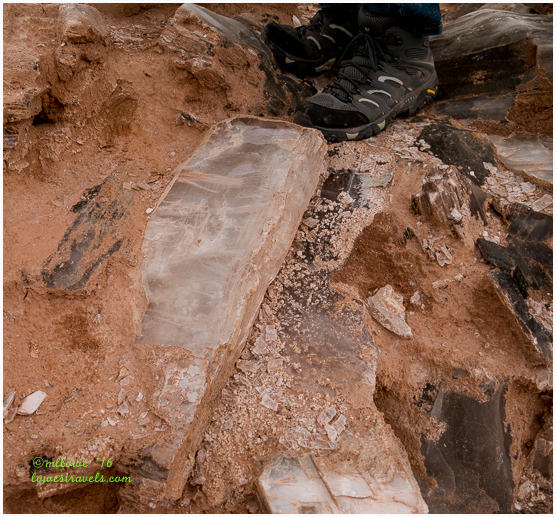 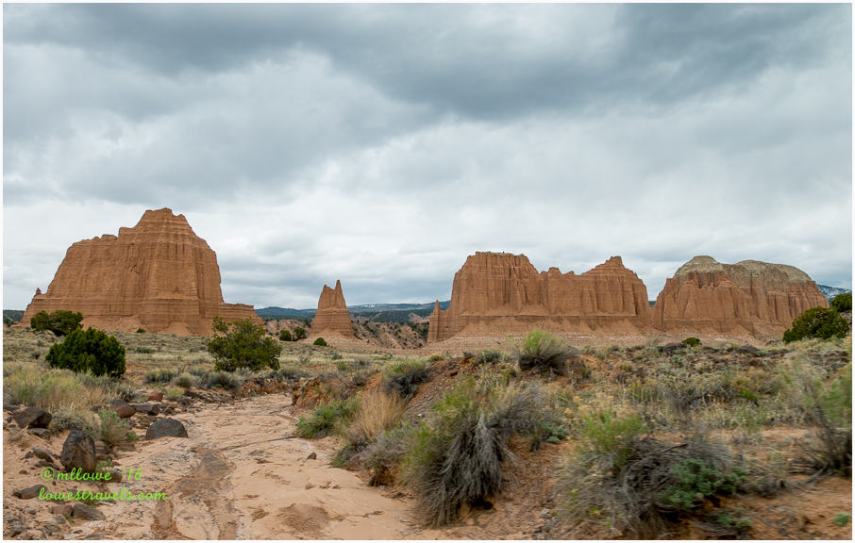 Cathedrals – a line of beautifully striated buttes and pillars

With John and Pam after our walk into the Gypsum Sinkhole, just before the wind kicked up

Here’s what we saw as we were leaving the valley

There was a hike planned for this trip, but the wind and imminent rain made us re-think and eventually backtrack to the main road.  Just as we were approaching it the rain began, and we were certain we’d made the right decision.  But we had a great day in the desert and thank our friends for inviting us once again.

Dust blowing down the road, followed by serious rain soon after

Rainy weather plagued us during our stay, and with several days ending up unhikable (is that a word?) in the afternoons, we started off early one morning.  First we hiked the Capitol Gorge Trail, which began at the end of the Capitol Gorge spur road.  It was an easy walk down the wash between towering cliffs of buff-colored sandstone, weaving its way into the very heart of Waterpocket Fold.  The walk had an option to hike up to several “waterpockets” or “tanks,” which we did.

Erosion created these tanks, or water pockets, in the rocks that hold critical rainwater for animals living in the fold

Mother Nature’s fascinating works of art made us stop and stare: 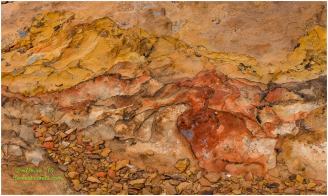 We spotted historic inscriptions about the pioneers who had passed over the original road through here.  This antique graffiti is called the “Pioneer Register”, and we saw names and dates from the late 1800’s all the way up to 1942:

Zooming in on the Pioneer Register, a jumble of names and dates appear on the rock wall 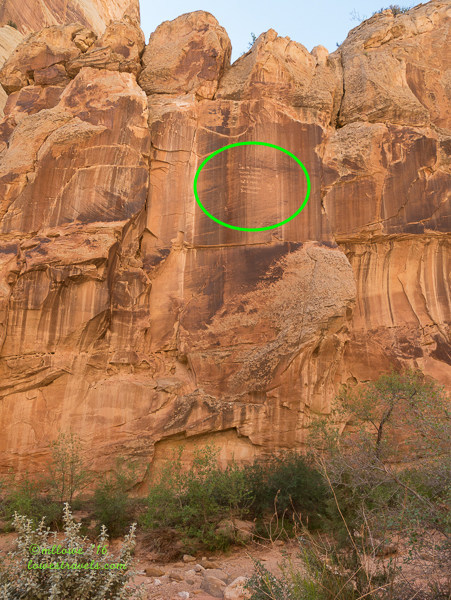 Since the weather remained decent for a while that day we added the 2.6-mile roundtrip Fremont River Trail to our trek.  We accessed it from behind the Gifford House, where I bought my 3rd pie on this stop- they were soooooo good!  Our paper map showed it as a moderate hike, but in reality it was an easy stroll the first half and then became quite strenuous the second half.

We passed thru Mulfor Orchard, which held lush peach trees and irrigation ditches

We were rewarded with great views here – the Fremont River Gorge as it cut through pine- and juniper-studded Miners Mountain, the Fruita Historic District and the western escarpment of the Waterpocket Fold. 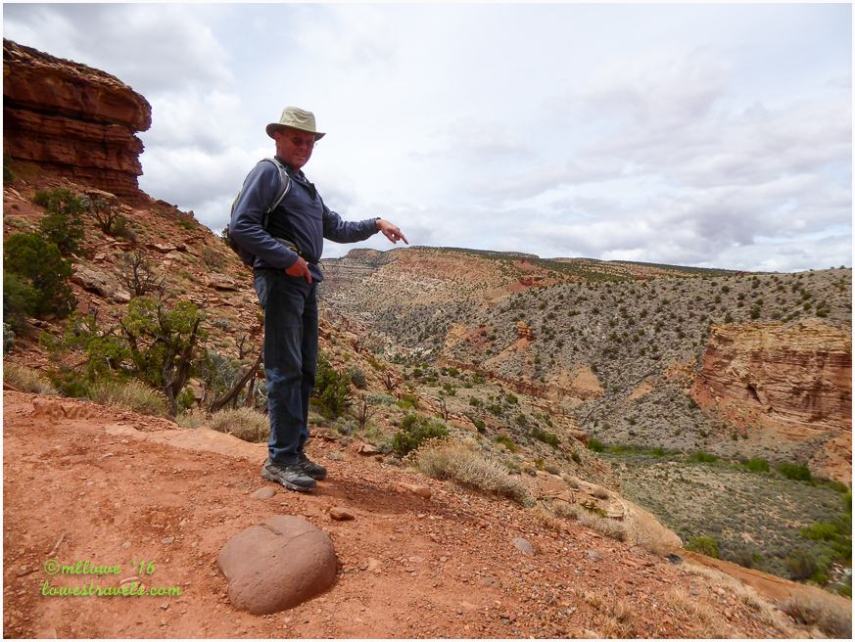 On the way back, the western escarpment of the Waterfold came into view

The weather had cooperated after all, and we were happy to get in five miles of hiking on a day when we didn’t think we’d make it out at all!

The topper – Steve spotted this gorgeous red/orange/yellow bird as we completed our hike:

The plumage of a Bullocks Oriole caught our attention

Steve took a day off and I went for a solo hike on the moderate 3.5-mile Chimney Rock Trail Loop, and added a 2-mile side trip to Chimney Rock Canyon.  The previous day’s rain had not muddied the path as Steve had guessed it would, and this hike provided some excellent “alone time” for both of us on a sunny day.

Easy obstacles to conquer along the way

There was lots to see in Chimney Rock Canyon.  I climbed over huge boulders that obstructed the washes, craned my neck to view towering examples of honeycomb weathering and gushed over sweeping Wingate Cliffs.

Then I retraced my steps and picked up the Chimney Rock Loop Trail, where views at the highest point of the Mummy Cliffs were no less spectacular:

Nature’s tiedown for a dead tree

A selfie without the stick

Looking down at Chimney Rock and Highway 24

We tried to drive Utah’s Scenic Byway 12 during our stay in Torrey, but were unable to complete it due to snow at the higher elevations.  At least I was able to get out of the car and take advantage of a “photo op” before we turned around:

Snow showers in May!

This day also ended well, for when we arrived back at the campground we had two guests waiting for us:

What a week it was!  Sensory overload with all the vibrant colors of the exposed rock layers, and the remoteness of so many hikes bringing us welcome solitude.  This national park should not be missed! 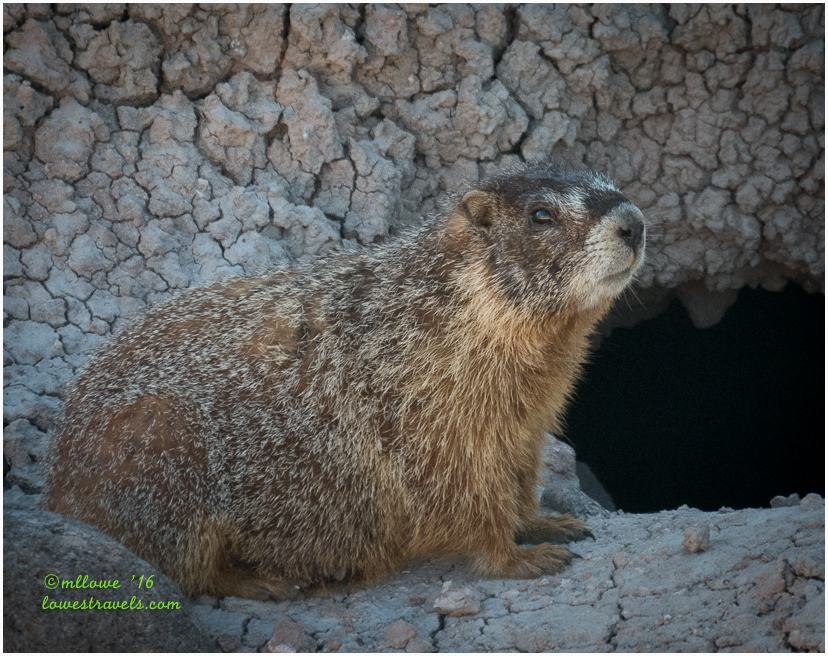 Mr. Marmot says, “thanks for coming, visit us again!”

Next up:  Memorable landscapes along Utah’s Scenic Byway 12