By the second week of our stay we avoided going into Zion National Park, for the spring break crowd with its associated traffic was getting tiresome.  We found some trails outside the park and just a few miles from our site at Zion River Resort in Virgin.  They didn’t have the spectacular scenery that we’d gotten used to, but they held plenty of beauty.

Confluence Park is a 344-acre natural park that is uniquely located within the city boundaries of both Hurricane and LaVerkin, Utah.  It’s tucked down in the bottom of a rocky gorge where Ash Creek and La Verkin Creek meet the Virgin River.  Several trails criss-cross the park and we leisurely followed some of them.  It was an easy walk and we enjoyed it for the natural beauty and almost total quiet, except for a few chirping birds.

Cacti growing out of a basalt cliff

Getting up close to the basaltic flows

Historic barn in the park

Not typically seen on our hikes, a rope swing hung from a tree next to the river.  I had to give it a try, but decided not to actually let go and plunge into the cold water. 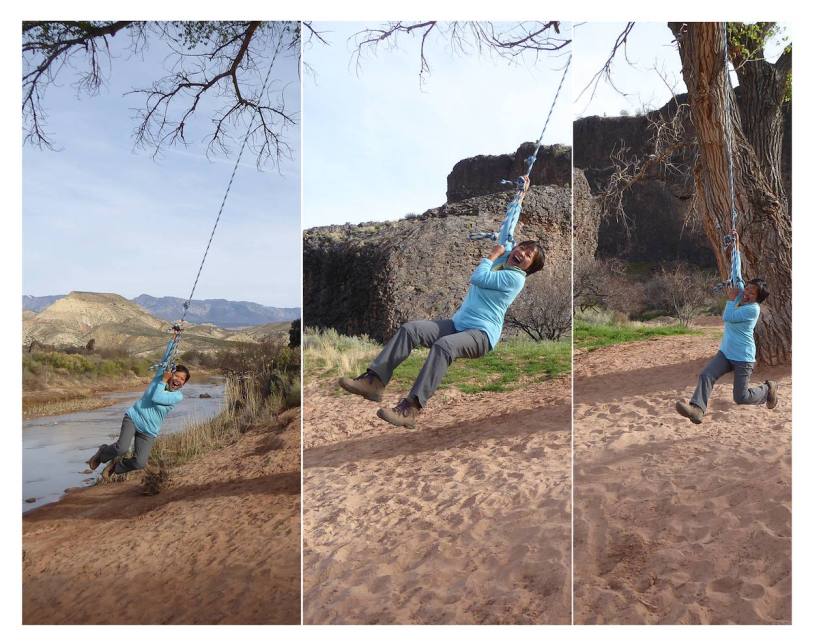 Just  three miles west of our campground on Hwy 9 near the town of La Verkin, we discovered a 1.5-mile gravel-and-dirt road that lead to La Verkin Overlook.  The first time we drove here was to check out the 360-degree view of the richly colored valley and mountains ranging from Zion to the Pine Valley Mountains.  We noticed a trailhead right off the parking lot and vowed to come back to check it out, time permitting. 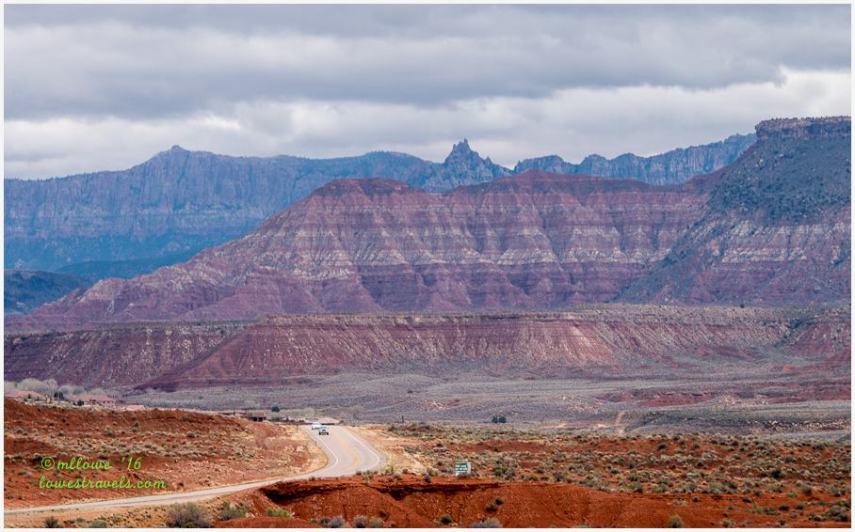 Well, we did make it back and guessed the La Verkin Trail was probably a good workout hike for the locals, rather than a challenging destination hike.  No matter, we were going to give it a shot!

The trail was all downhill at the beginning and ran parallel to stunning cliffs with steep drop-offs to the left and gentle sloping hills to a neighborhood in the distance to the right. Although it was rather cold that morning, I enjoyed this hike because of the many wildflowers in bloom.

We also had good views down into an impressive section of the gorge that’s been cut by the Virgin River as it flows relentlessly through the towns below: 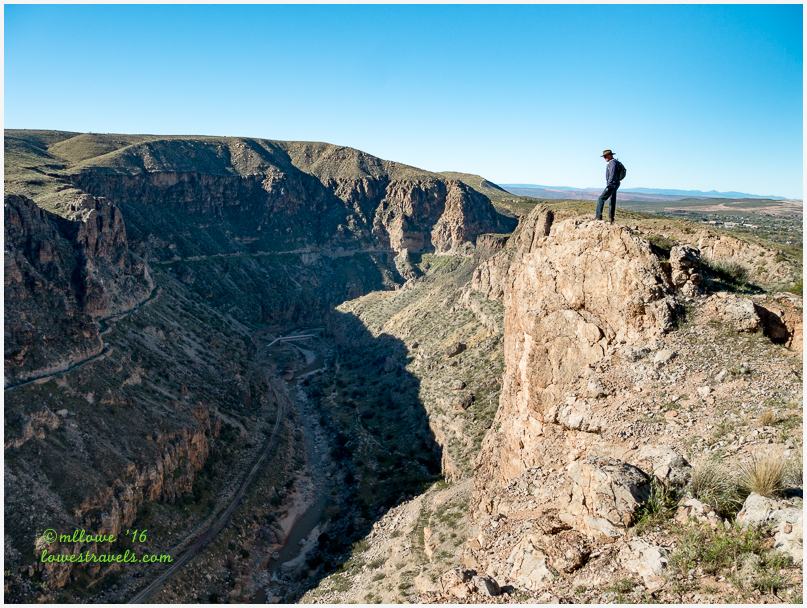 Looking down at the gorge cut by the Virgin River

According to Wikipedia, theories about the origin of La Verkin’s name suggest it may be a corruption of the Spanish term la virgen, after the nearby Virgin River, or possibly an error in translation of the term “beaver skin.”

To the west, the town of La Verkin with the red foothills of Kayenta in the distance

We stopped at the foot of the bridge and could go no further, as the trail ended at a power plant that was gated and fenced. 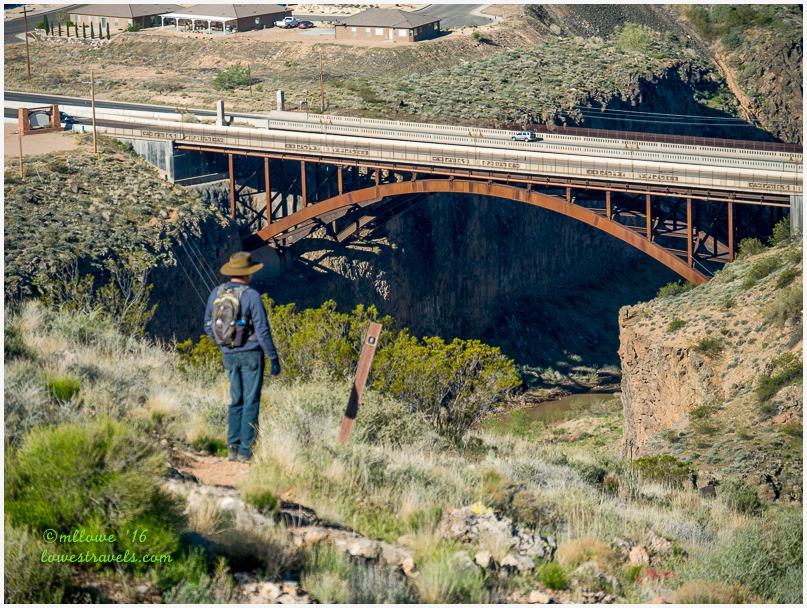 On our way back, these vibrant yellow, orange and red wildflowers caught my eye: 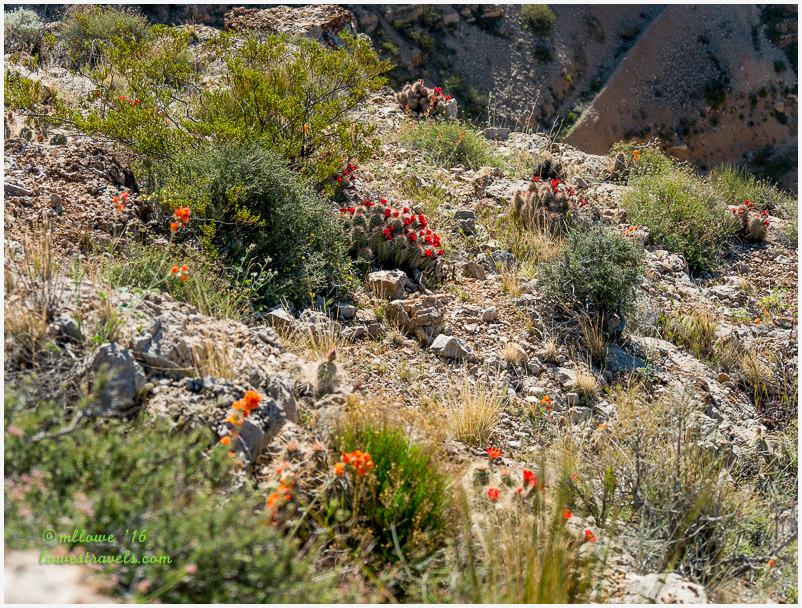 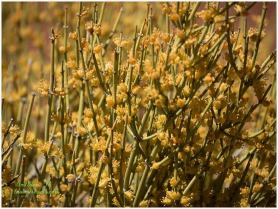 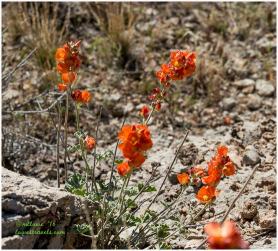 This was a fairly short but moderate hike, and we found it to be a good diversion from the big-time hiking we had done during the past week.

We were faced with colored and layered mountains as we headed back out the dirt road toward Hwy 9. 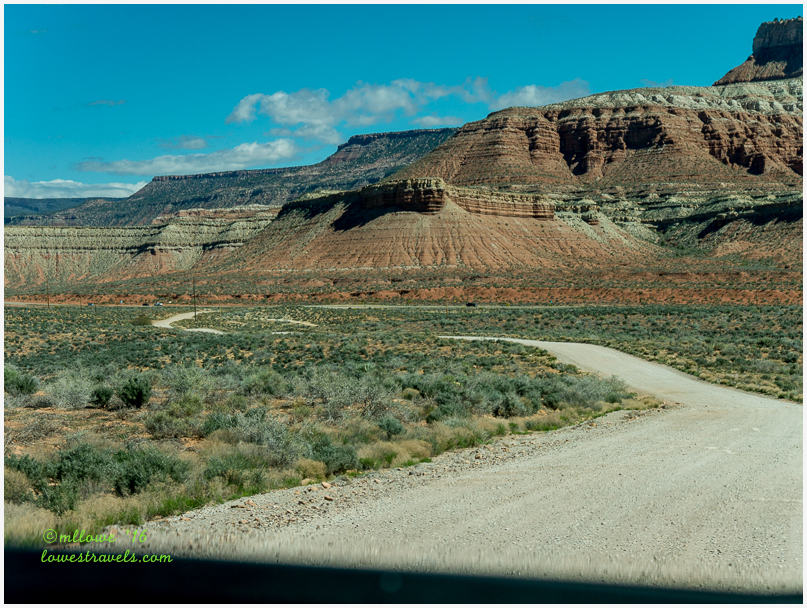 One day we drove the Kolob Terrace Road to pick up the Northgate Peaks Trail.  This trek weaved through tall Ponderosa Pine groves throughout its length.  The 4-mile round trip trail ended on a craggy knob of volcanic rock, with views of slickrock, sandstone towers, and a big cloudy sky overhead.  A brisk wind prevailed on the day we tackled it.

The morning greeters kept an eye on us as we passed: 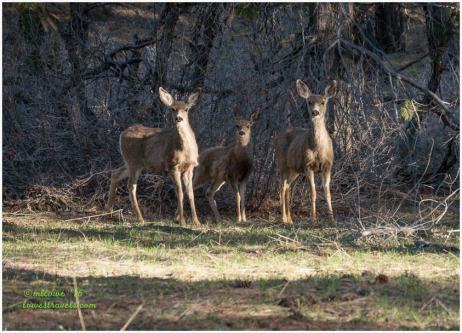 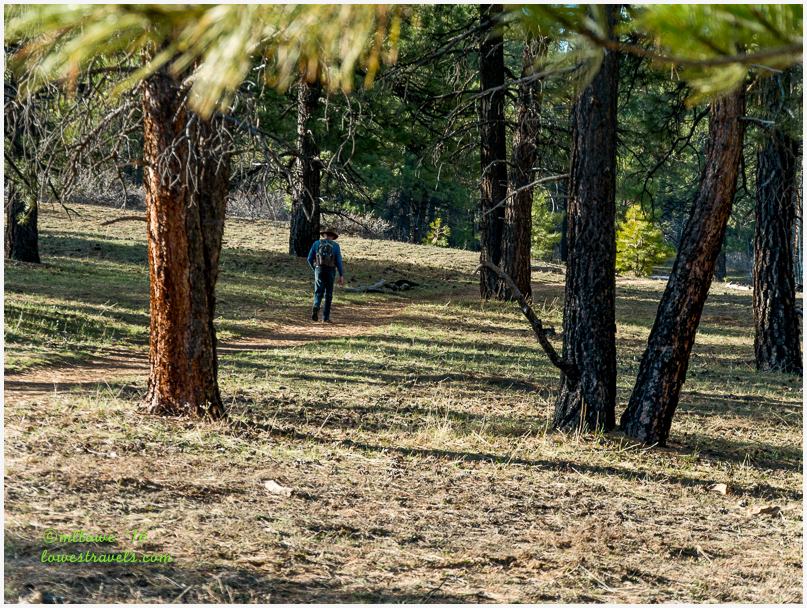 Instead of sandstone canyons, it was Ponderosa Pines that dwarfed us on this jaunt

Along the way we encountered an area that had some weird sand trails.  Steve thought they may have been created by moles, but they look different.  Anybody know?

Do you know what these are? 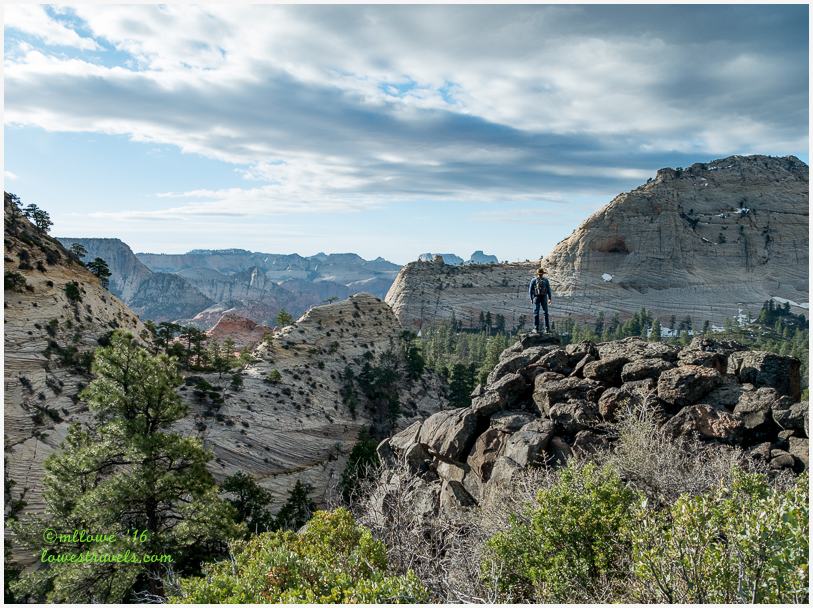 Great West Canyon at the end of Northgate Peaks Trail 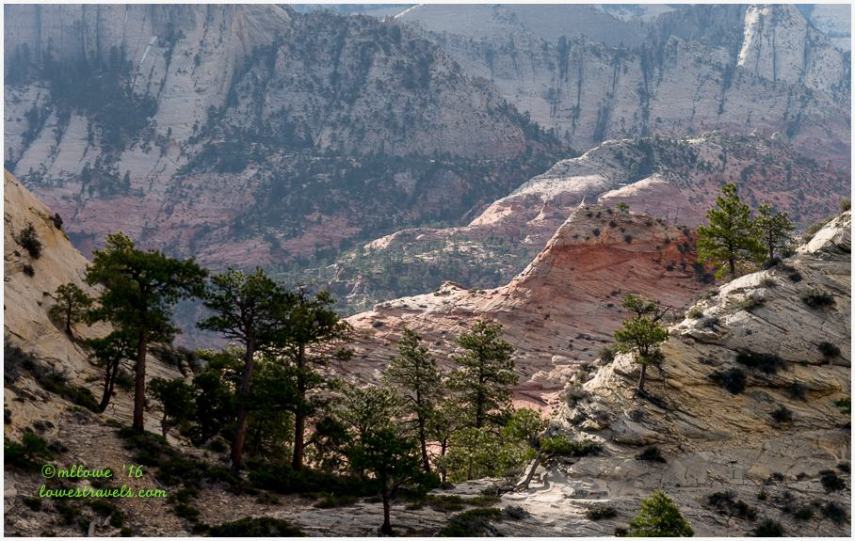 With the storm clouds threatening above, we hustled back to the car.  The unique scenery with Stellar Jays, Northern Flickers and Mountain Bluebirds made this an enjoyable hike, and it turned out to really be for the birds 🙂

Driving back and forth to Zion NP numerous times, we couldn’t help but noticed a jagged rock formation near Hwy 9 at Rockville.  We learned it was called Eagle Crags, a sandstone formation that topped out at 6,350′ and included a hiking trail that lead to its base and then up into the rocky spires.

Keeping “crowd control” in mind, we bundled up and headed out early one morning.  A sandy and rocky road just south of Rockville challenged our poor CRV to the max as we drove up through some private roads to the trailhead on BLM land.

We began following the trail, which gradually climbed across a juniper-covered ridge and toward the craggy towers rising to the south:

The path to the base was sandy through a  a labyrinth of desert vegetation. 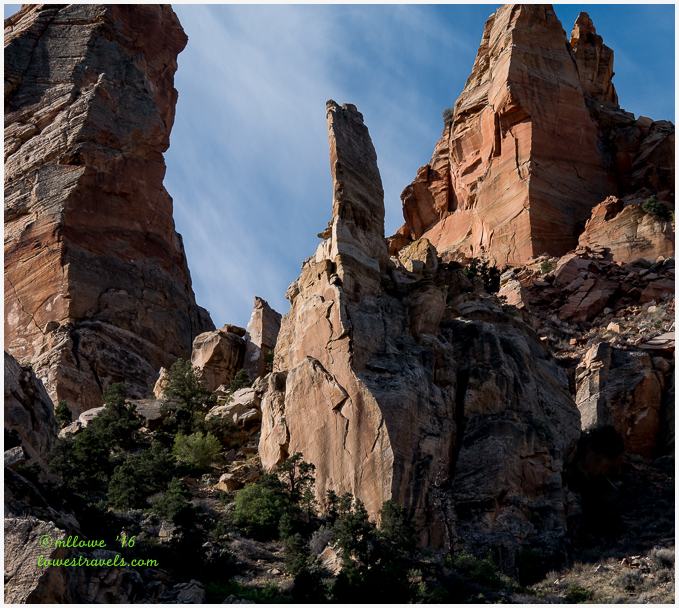 As usual, I couldn’t help myself and stopped every time I saw colors along the trail.  No matter how large or small, it was springtime after all and the wildflowers were showing off their colors: 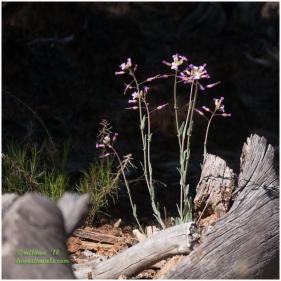 We hiked just beyond the base of the mountain to where much more strenuous rock climbing would have been required to continue.  We had no intention of trying for the top of these jagged rocks, and were happy to just get close to them and stop for a nice view as we enjoyed lunch. 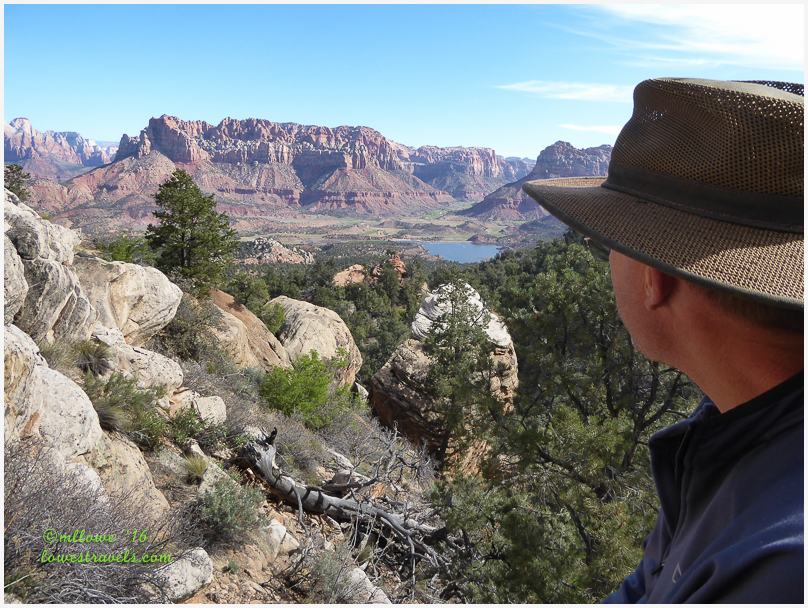 South Creek Reservoir and the mouth of Parunuweap Canyon

Goodbye Zion, till we meet again!

That wraps up our 2-week hiking bonanza in and around awe-inspiring Zion National Park.  It’s definitely a one-of-a-kind place with countless hiking opportunities.  We love this place and will definitely come back!