On the fringes of the Sonoran Desert – Black Canyon City, AZ

Leaving the high country (including Prescott) behind, we headed south to lower elevations. As we descended a cut in the mountains on I-17 we began seeing the stately Saguaros jutting out of the hillsides, signaling that we were on the fringes of the Sonoran desert and bringing smiles to our faces.  We were fortunate to snag a site at Black Canyon Ranch RV Resort on short notice (Steve’s review here), especially considering we would be staying over the Thanksgiving holiday. 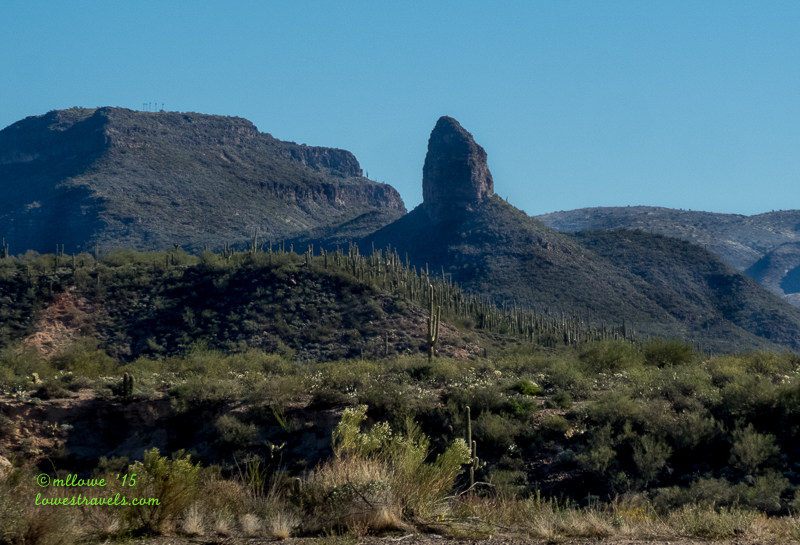 The western half of Black Canyon City is nestled in the foothills of the Bradshaw Mountains, while the eastern half is surrounded by table mesas.  The city was so named after the color of the basalt in the surrounding rock.  We found this small rugged city surrounded by beautiful scenery to be a place that we might be able to settle down in someday – just far enough away from the hustle and bustle of Phoenix.

Having been cooped up for several days at Prescott, we couldn’t wait to see if there were any hiking trails in this area.  We learned that the Black Canyon National Recreation Trail passes through here, stretching 79 miles from the Sonoran Desert lowlands in Phoenix to the high grasslands of Prescott Valley.  The trail was originally a corridor for early Native Americans and later became an official stagecoach stop in 1871 for weary travelers on the Phoenix to Prescott line.  Then in 2008 it was designated a National Recreation Trail to be shared by hikers, bikers and horseback riders.

With a brochure in hand we immediately marked the trailheads that we would explore during our stay.  We picked five – Emery Henderson, Table Mesa Road, Black Canyon City, Glorianna and Big Bug – all within a reasonable driving distance of our homebase.

At first glance these hikes may look boring, but we love hiking in the desert and enjoying the diversity it offers.  Trees such as the Palo Verde (Arizona’s state tree) are abundant and well developed on the desert ranges.  We hiked along thorny and non-thorny shrubs, cacti, herbs and of course the most conspicuous feature – the stately Saguaros.  We’re very happy to be back in the Sonoran Desert!

Surprisingly, each section of trail we followed offered different facets of this interesting area.  On one, the Prickly Pears were abundant, but the next was covered with Fruit Chain Chollas.  Yet another led us through a forest of Palo Verdes and Mesquites along a wash. But those Saguaros were omnipresent, standing like sentries everywhere we went. 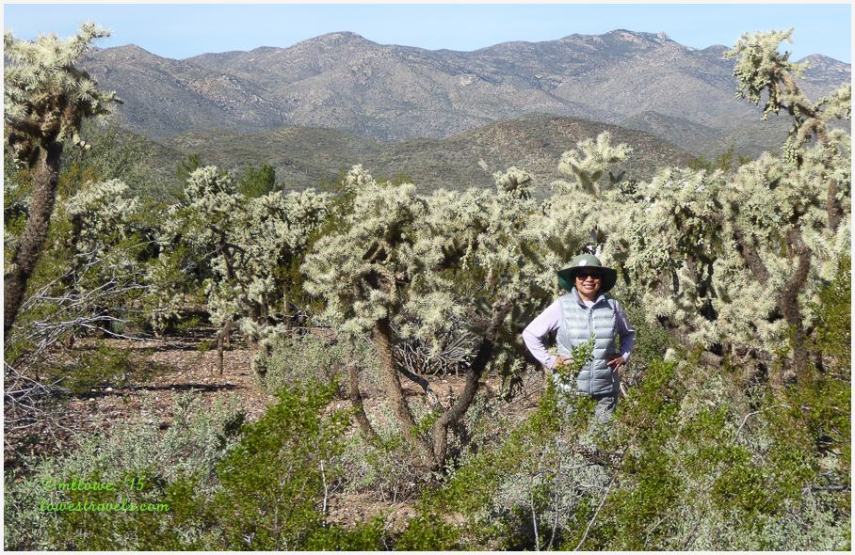 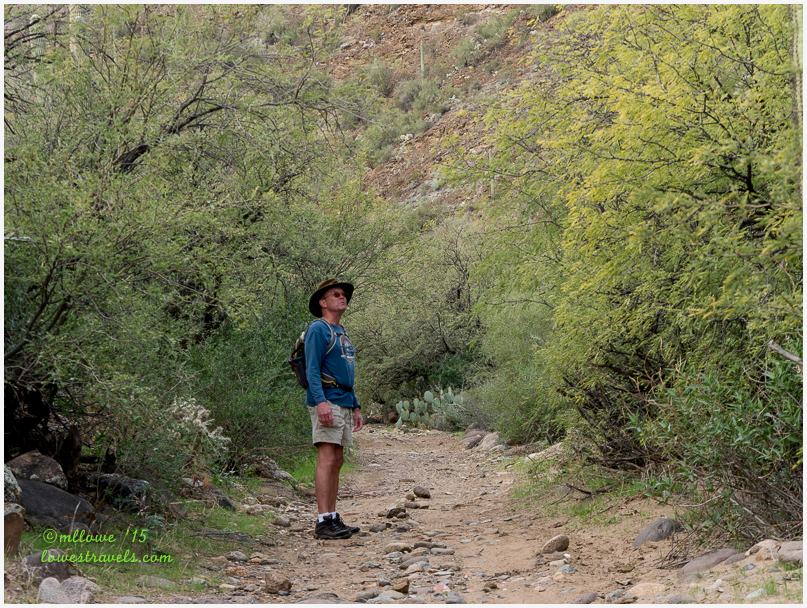 How do you hug a Compass Barrel Cactus?  Very delicately! 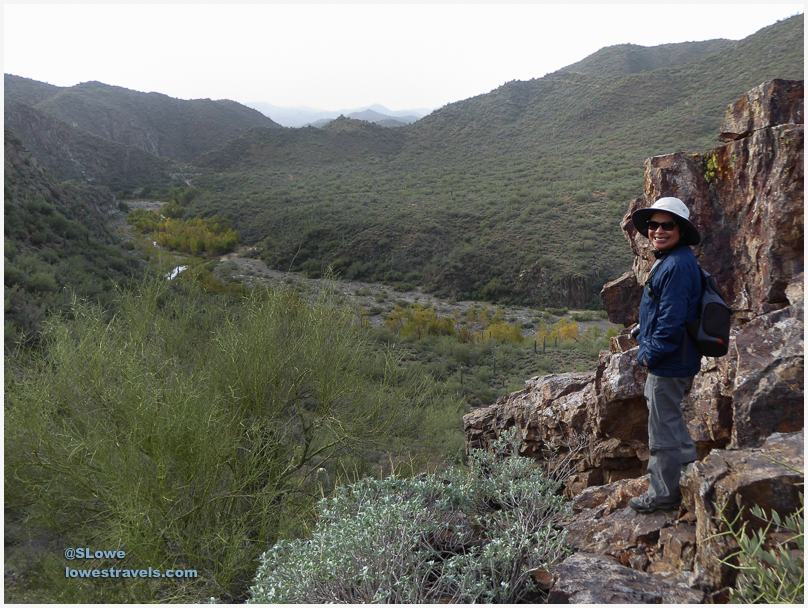 A section of Black Canyon 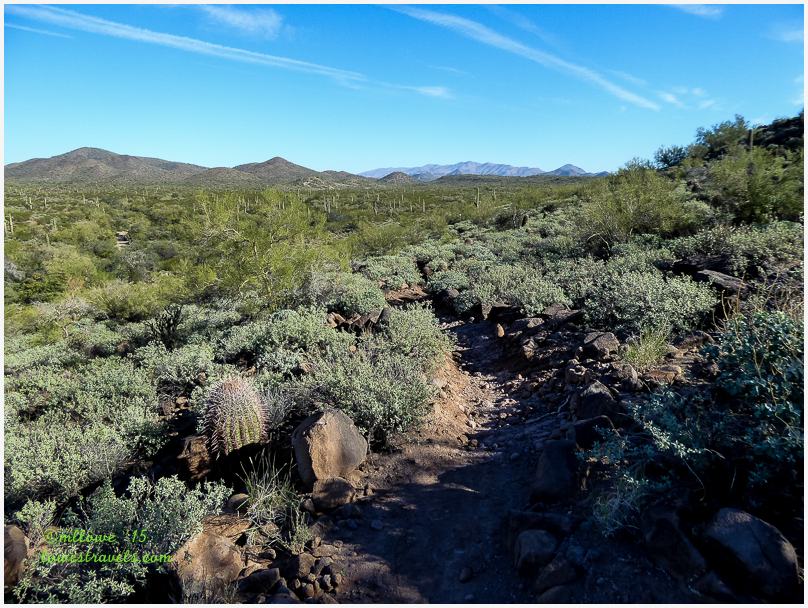 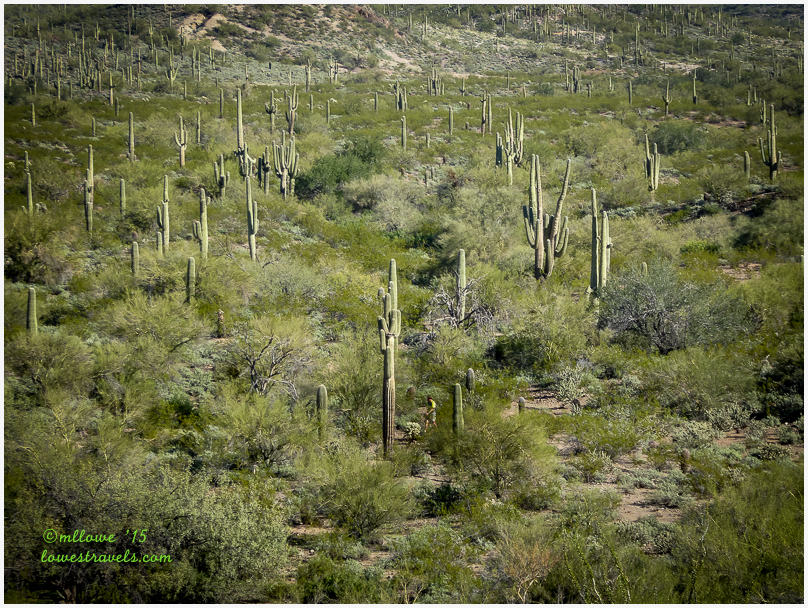 Steve is dwarfed by Saguaros and Palo Verdes, can you spot him? 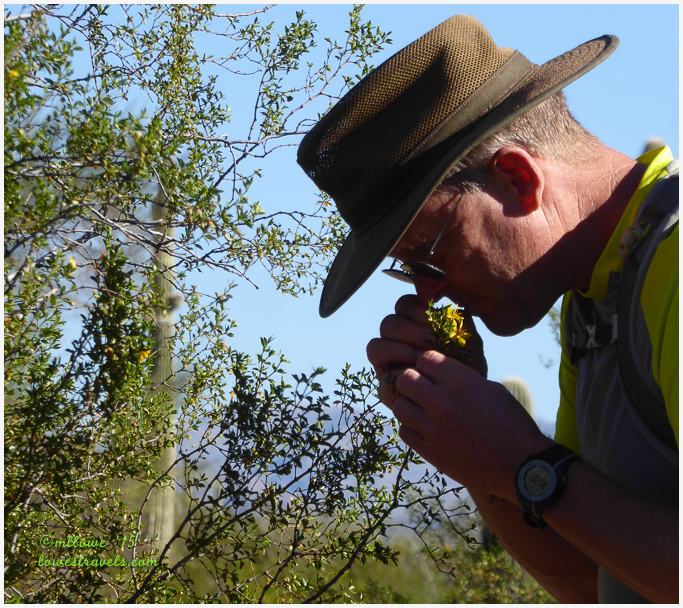 Hmm, yep this is Creosote!

Looking closely at the understory, I captured a burst of colors and prickly love.   Who says it’s all cacti in the Sonoran Desert? 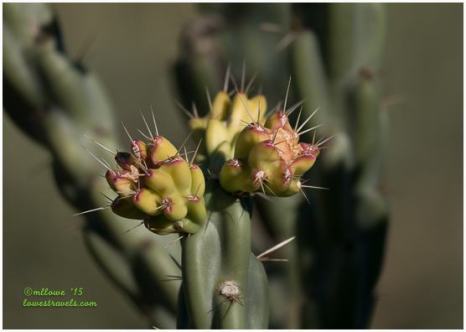 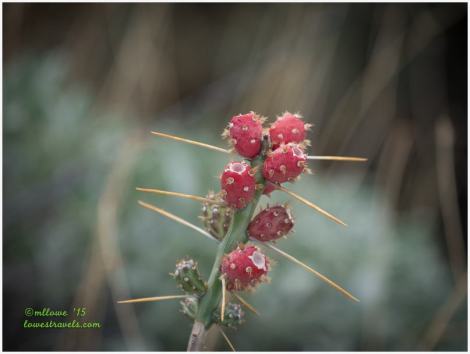 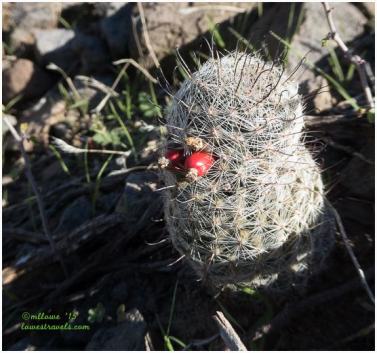 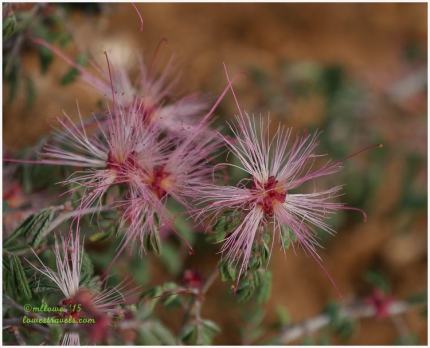 Unfortunately, we also learned that the Black Canyon Trail can be a noisy place on weekends.  Lots of shooting in the desert and dust from the ATV’s and bikers buzzing by tended to interrupt our reverie.  Early in the morning on weekdays quickly became our strategy for enjoying the lushness here, and we went out every chance we got.

The trail is that-a-way, Steve!

Although most of our time here was spent hiking, we added one attraction we thought would be interesting.  Following a sign we saw along I-17 we decided to visit Arcosanti, billed as “an urban laboratory”.

It didn’t really catch on with us.  Arcosanti is a unique community designed and built by Paolo Soleri as his experiment in marrying architecture and ecology – which he calls Arcology.  We joined a tour and learned about the philosophy, history, planning and ongoing construction of the project.  To us it sounded like another Crazy Horse Memorial, with no completion date yet predicted.

Urban communal living in the desert, not our cup of tea

One day we had our alone time, with Steve heading off to a Good Guys car show in Scottsdale while I hiked the 2.5-mile High Desert Trail managed by volunteers from Black Canyon City.  I played hide-and-seek with a Cottontail rabbit, was spat at by a hummingbird and serenaded by a Curved Bill Thrasher.

Hummingbird spitting at me..

We’re glad our stop at Black Canyon City was such a nice surprise, and those desert hikes gave us a warmup of things to come in the Sonoran Desert.  And that’s just the beginning of our winter sojourn in Arizona.

We’re struggling with bad connectivity and I’m falling behind on my blogging.  Hopefully we’ll be back up to speed soon for there is lots more to show and tell!

Next up:  Fun times in the desert sun!