The Red River is one of the few major rivers that flow north.  It originates at Lake Traverse in Minnesota and flows northward to Lake Winnipeg in Canada, forming the state border between Minnesota and North Dakota.

Our home base at East Grand Forks was located in the flat, fertile Red River Valley, which was once a part of a glacial lake, Lake Agassiz.  The landscape around the Red River is described as excruciatingly flat.  The river is highly prone to flooding because of its northward flow.  As spring approaches, the snow melts from south to north along the river.  The flatness of the terrain and small slope of the river are significant factors making the area a constant flood threat. 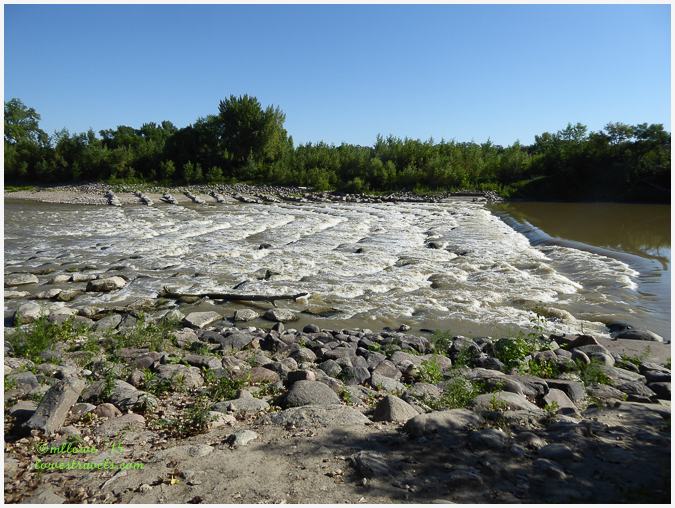 There were two major floods recorded during the past century, one in 1979 and the disastrous one of April 1997, when all but eight homes on 2,301 residential parcels were flooded in East Grand Forks.

All told, $3.5 billion in damages occurred in Grand Forks and East Grand Forks, making it the eighth most expensive natural disaster in the U.S. since 1903.

What were once entire neighborhoods bordering both sides of the rivers has been converted into a giant park called the Greater Grand Forks Greenway.  This is where we took long walks during our visit on the Grand Forks side.

The transformation was especially visible in East Grand Forks, where we stayed at the Red River State Recreation Area RV park (Steve’s review here).  It is located where one of the former neighborhoods stood before the 1997 event.

An “invisible” flood control wall has been built to protect downtown East Grand Forks. Its cutting-edge design provides the area with a view of the river instead of a dike.  If a flood threatens, additional sections of wall can be added to provide protection to a level approximately four feet above the crest of the 1997 flood, which was a 500-year event. Openings in the walls provide vehicle and pedestrian traffic throughways.

During our stay we crisscrossed the bridges that connect the sister cities of Grand Forks and East Grand Forks.  They have fully recovered and no visible signs of the devastating floods can be seen.  We shopped at the Cabela’s located right across the street from the campground.  It’s one of the large businesses that was confident enough to move into the area after the floods and subsequent upgrades.

We crossed between MN and ND several times on the bridges…

…and on a pedestrian walkway

Besides walking and doing some shopping, I found time to goof off a bit… 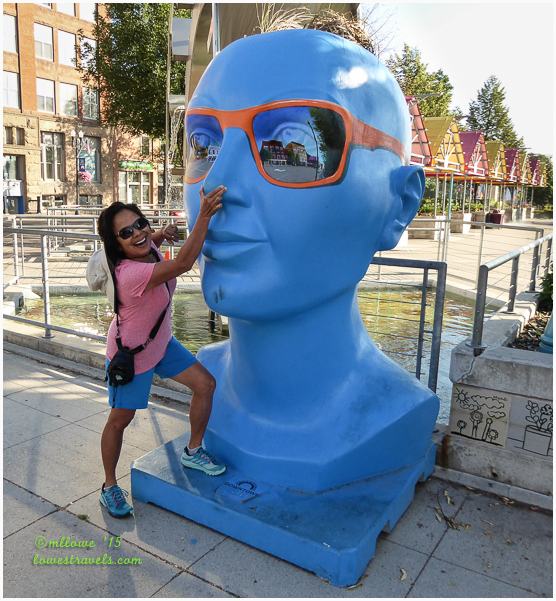 One of our favorite surprises is to run across a farmer’s market while walking around town, and that’s what happened on one of our Saturday morning treks.  Among other things, we were amazed by the size of the cabbages for sale by one of the vendors.

We ended up with a bag full of fruits and veggies that was not part of our plan, but we enjoyed walking home with our bounty all the same. 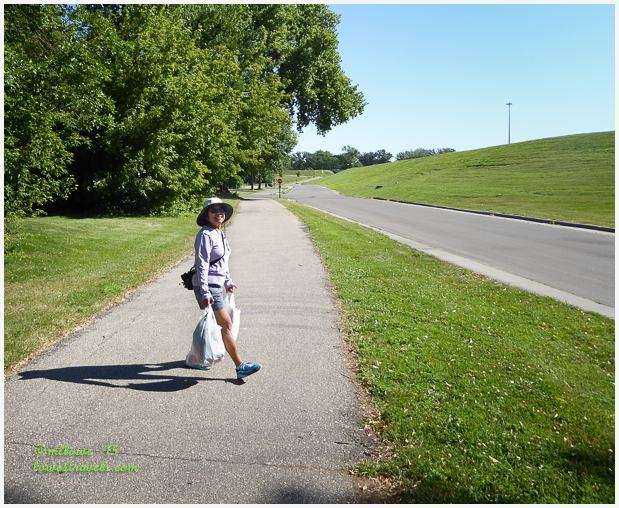 Our tale of two forks in one river in two countries gave us some history lessons and several enjoyable experiences we won’t soon forget!