Exploring the Headwaters of the Mississippi – Lake Itasca, MN

I have always wondered where some of America’s largest rivers originate.  We’ve hung out around many rivers – big and small – yet we’ve never seen the actual place where any of them originate.  Now that we’re in Minnesota I can finally visit the beginning of the celebrated Mississippi River.  My first glimpse of the Mighty Mississippi was in New Orleans where the river, wide and muddy, was just 100 miles from its dumping point into the Gulf of Mexico.

I was excited to read Sherry’s detailed stories of their stay at Itasca State Park, since it was on our route as we headed north this year.  Although we couldn’t get a reservation in the park, we were able to grab one at nearby Camp Itasca (Steve’s review here), located just outside the north entrance to the state park.

A beautiful day at Lake Itasca

Lake Itasca is the official headwaters of the Mississippi River, and it’s located within the boundaries of Itasca State Park.  However, it seems there have been perennial questions relating to the river: Who discovered the true source of the Mississippi?  What is the source of the river?  Several exhibits and interpretive displays at both the Jacob Brower Visitor Center and the Mary Gibbs Mississippi Headwaters Center attempt to answer these questions.

The questions began in 1783, when the U.S. needed to fix its western boundaries.  Between 1798-1888 the race was on to find the source of the Mississippi.  Explorers, surveyors, officers, journalists and the government all had different claims of places as the source. 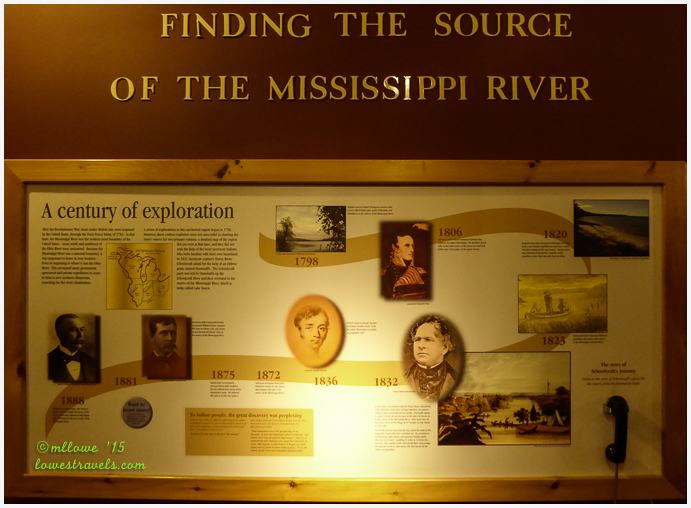 Henry Schoolcraft ultimately got credit as the discoverer in 1832, and he concocted a name for the lake by putting together parts of two Latin words, verITAS CAput, or “true head.” His claim of Lake Itasca as the source was disputed until 1888, when Jacob Brower was sent by the Minnesota Historical Society to survey the lake.  Like Schoolcraft, he concluded the outlet at Lake Itasca was the only one with a surface flow and volume large enough to constitute the beginning of a river.  He included the entire watershed when declaring Lake Itasca as the true source.

Some folks believed Joseph Nicollet was correct when he described a river as beginning at the farthest point upstream where the first drops of water flowed.  This was contrary to Schoolcraft’s and Brower’s theory that it was the farthest point upstream where the flow first constitutes a river.  Even the length of the river was up for argument.  So much controversy, but we were just happy to be where it all began 🙂

And so here we were, at the cool, clear and pristine beginning of the Mississippi river.  The boulders in the center separate the lake from the river, and this is where people linger in crossing, with some wading a few yards through the water.  As you can see the channel is lined with grasses, and pebbles cover its bottom. 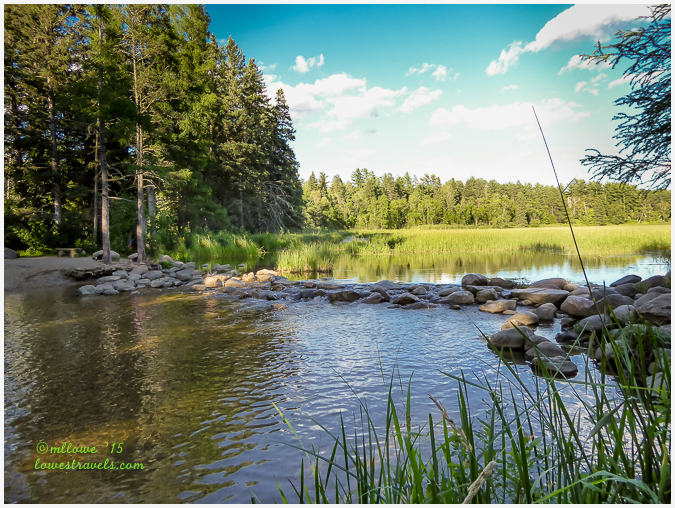 The headwaters of the Mississippi River, looking north

This is a gussied-up version of the nascent Mississippi; in its natural state, it was a muddy swamp.  Civilian Conservation Corps crews revamped it with tons of rock and fill in the 1930’s.

From Itasca, the river first flows north to Lake Bemidji, then journeys south as it meets up with its tributaries for either 2,340 or 2552 miles (there’s that length argument).   About 90 days after leaving here it flows into the salty waters of the Gulf of Mexico.  Below is a picture I took of the river in New Orleans, 112 miles from where it empties into the Gulf.

March 2013:  From here in New Orleans the river has about 100 miles to go before emptying into the Gulf of Mexico

We saw an interesting display that showed some stats about the beginning and end of the Mississippi River:

After that exciting learning experience we did some hiking on the park’s trails, drove along its beautiful wilderness road, and finally ended the day with dinner at Douglas Lodge, also located within the park.

Arriving early one beautiful morning, we opted to hit some trails while it was cool out, before exploring the rest of the park.  We followed the popular Dr. Roberts Nature Trail, which started at the south end of the lake shoreline.  This two-mile loop passed through a bog on its way to the Old-Timer’s Cabin, which a CCC crew built with four giant logs in the winter of 1933-34.

This was one of the first cabins built in the park by the CCC in 1933, constructed out of 4 huge downed trees

Halfway through, we were harassed by swarms of relentless mosquitoes and deer flies. Fortunately I still had our mosquito nets packed from our days in Alaska, so we hastily donned them for the part of the walk through the bogs.  Not a nice place!

Hubby prepares for the onslaught of flying critters

We decided to check out the headwaters in the evening after seeing how crowded they were in the morning.  While there we followed the 2.4-mile roundtrip Schoolcraft Trail in search of the Loons that spend their summers at the lake.  The mosquitoes weren’t as bad here, so we marched on without our head nets.  I was glad we did, because we saw not only Loons but also some other cool birds in the vicinity.

We heard the haunting call of the Loon

Bald Eagles on the hunt 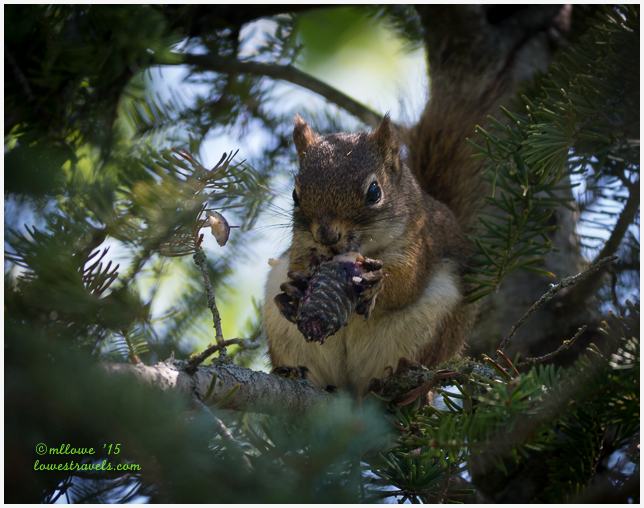 A little fellow collecting food for the winter

Continuing past the headwaters, we followed the 10-mile Wilderness Drive, which soon turned into a one-way road.  Itasca contains more than a quarter of the state’s old-growth pines outside of the Boundary Waters, and for this reason the park was established in 1891 to preserve remnant stands of virgin pine and to protect the basin around the Mississippi’s source.  We stopped at two roadside displays, the Big White Pine and Big Red Pine lookouts.

The White Pine is 112 ft. tall and 300 + years old, while the Red Pine was formerly Minnesota’s tallest Red Pine standing at 126 ft. and 300+ years old.  Unfortunately, a wind storm broke off the Red Pine’s top in 2007 so it lost its stature as a champion tree.

We learned that the Red Pine has reddish brown irregularly-shaped bark, while the White Pine has very rough gray horizontal bark. 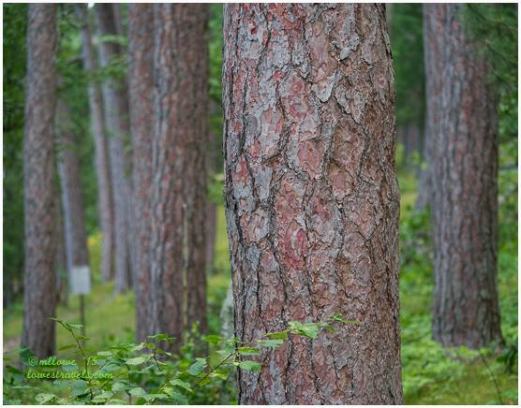 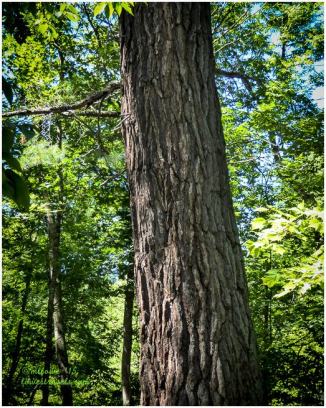 Near the end of the drive, a half-mile gravel walking path lead to the Aiton Heights Fire Tower.  The tower is 100 ft. tall, and we were rewarded with a wonderful 360-degree panoramic view of the park after climbing to the top. 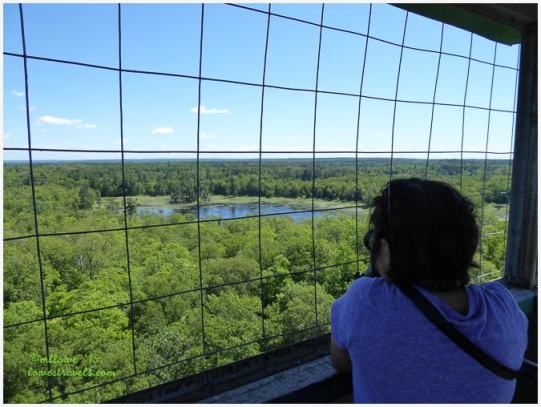 We had a bird’s eye view of the headwaters from up here:

After all that walking, driving and excitement at the headwaters we were ready for a taste of nutty Minnesota Wild Rice.  As the rice eater in the family, I gave this Wild Rice Hot Dish two thumbs up! 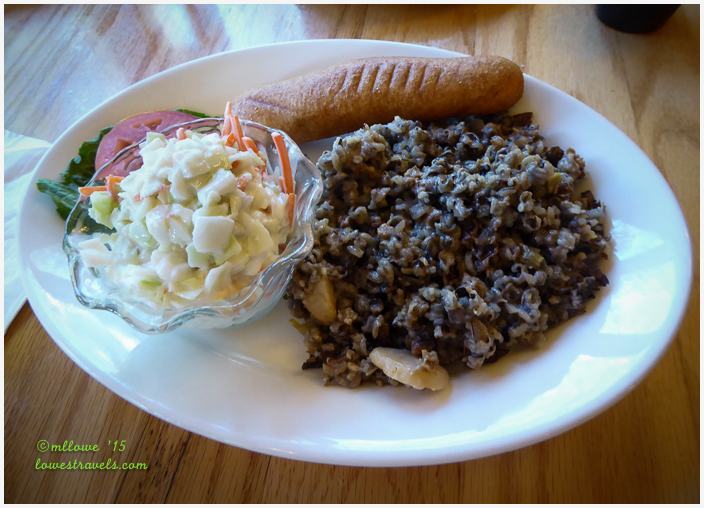 We had a great day at the headwaters and throughout the park.  Now we can say we’ve been to the beginning, middle and end of the most celebrated river in America, the Mississippi!

Next up:  A Tale of Two Forks

Categories: Minnesota, Where we have been