Leaving Big Bend behind and heading north on FM118, we continued to enjoy the beautiful scenery that far-west Texas is proud of.  So beautiful, that on this day we saw several aspiring artists facing either a mountain or a flower-covered field while capturing its beauty with strokes of their paint brushes. 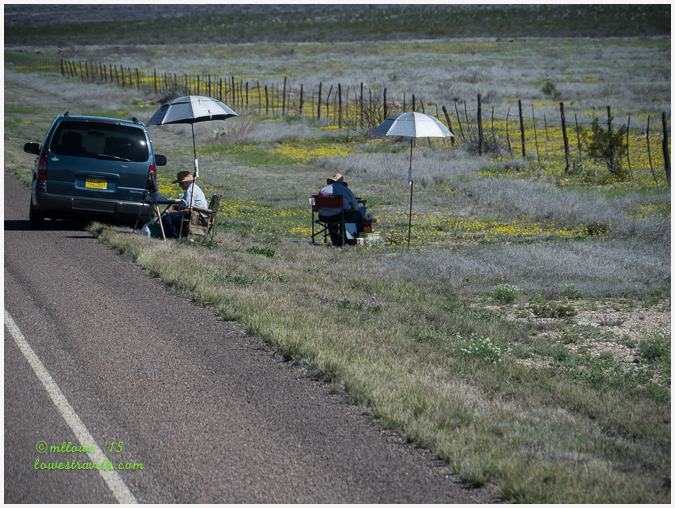 Our next destination was Davis Mountains State Park in Fort Davis, TX.  Armed with recommendations from Laurel and DK, we were excited to explore and see for ourselves why they liked this area.  We thought Big Bend would be a hard act to follow, but we discovered that Davis Mountains represents some of the very best Texas has to offer. Because of its remoteness, we had to be willing to “disconnect” from the world for a week, which was fine with us. ( It’s a hint as to why my posts are now a bit delayed 🙂

Hey, it was well worth it! 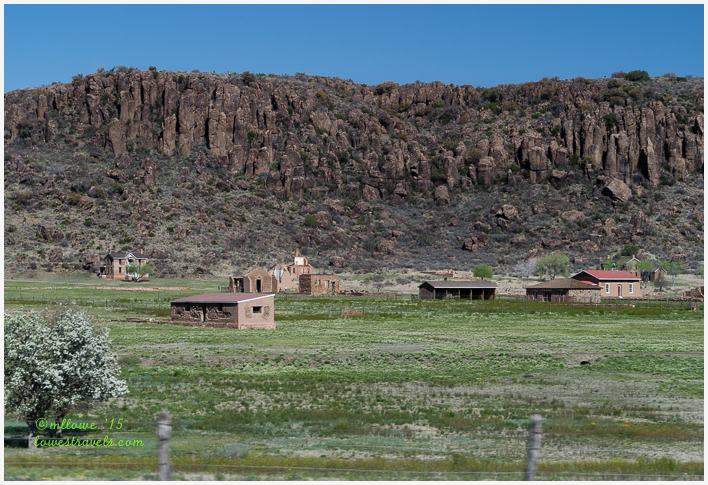 One of the highlights of our stay, and the major tourist draw in Davis Mountains, is the McDonald Observatory.  We had previously visited smaller observatories at the Sunspot Solar Observatory and the privately-owned Apache Point Observatory in Cloudcroft, NM in 2012.  After seeing those facilities, and because the timing just wasn’t right, we skipped the McDonald Observatory on our previous drive through Texas.  Fast-forward to the present, and this time we made sure to add it as a stop.

We finally made it!

We don’t claim to be into astronomy, but who wouldn’t enjoy looking through high-powered telescopes into the heavenly skies for a closer view of the billions of objects out there?  It made us realize once again what a tiny speck we are in the universe.  But once again I’m getting ahead of myself…

The winding road leading up to the observatory is the highest point on Texas highways.  Its location was selected due to its high ratio of clear nights, distance from artificial sources of light and home to some of the darkest skies to be found in North America.  McDonald Observatory, a research unit of The University of Texas at Austin, houses three huge research telescopes that are not accessible for public use; the 82″ Otto Struve, the 107″ Harlan J. Smith, and the 433″ Hobby-Eberly.  Way up there on top of the mountain, they are visible from miles away.

There are also many smaller telescopes located around the visitor center, and regular folk like us can look through them during tours for excellent views of the moon and several star constellations.

On our first trip “up the hill” we joined a daytime guided tour that gave us not only an up-close look at the observatory’s large research telescopes, but also some stunning (and safe) views of the sun.  After an excellent 45-minute presentation (the guides are obviously scientists), we took advantage of the clear skies to enjoy real-time views of features on the sun.

During the program, our guide discussed some interesting highlights about the history of the sun, its formation, and what we expect it to do over its remaining expected 5-6 billion year “lifetime”.  We were blown away by what we learned about our closest star, and the overwhelming stats flew through my head which made me a bit dizzy.

The Frank N. Bash Visitors Center on the right, the amphitheater on the left, and several “smaller” telescopes

After the presentation, we followed our guide on a drive up Mount Locke and entered the dome of the Harley J. Smith Telescope.  When the guide asked for a volunteer to steer the telescope around the dome, my hand was the first one up – as usual!  Tilting the huge telescope up with its remote control was very cool, but unfortunately the camera was in my pocket and Steve was unable to take advantage of a great photo op – bummer!

After learning how the large telescopes work, we next drove to the summit of Mt. Fowlkes where the Hobby-Eberly Telescope is located.  We saw that the HET is not your typical telescope design.  It uses a segmented-mirror scheme, where 91 “small” mirrors – each one about 40″ across and weighing 250 pounds – make up one huge mirror.

We also learned from our very knowledgeable guide that this was the first telescope to use such a low cost (for a world-class telescope, at least) design, and that the HET is currently being re-fitted for some new cutting-edge research projects.

Viewing the sun during the day was pretty impressive, but the real thrill was yet to come a couple of nights later.  We bundled up and drove back up to join one of the observatory’s “Star Parties”.  This is one party where you definitely want to be sober so you can enjoy stunning views into the universe.  WARNING: You may have a sore neck after a couple of hours gazing into the super-dark night sky!

The party began with an informative “constellation tour” at the outdoor amphitheater, then moved to the adjacent Rebecca Gale Telescope Park.

At the constellation tour, the moderator pointed to various stars and constellations with an amazingly powerful laser pointer.  We could follow its beam way out into the sky, and he was careful not to point it at any overflying aircraft.  An added bonus that night was a satellite flyover which was visible to the naked eye, since it reflected sunlight as it passed hundreds of miles overhead.

We can now look up into the night sky and confidently identify some of the closest stars and planets and constellations – yay! 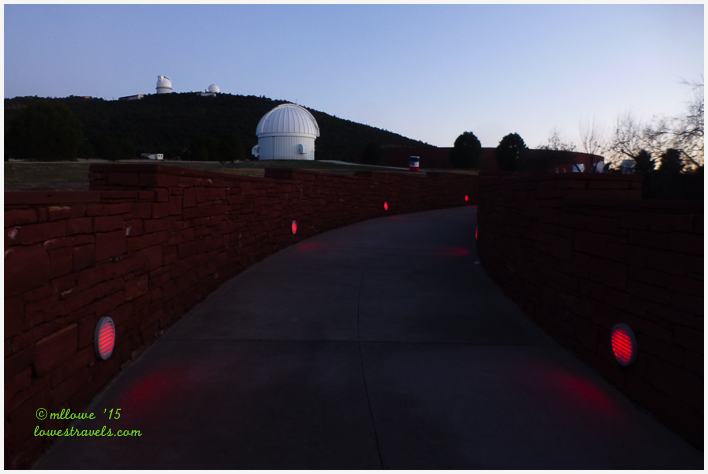 Getting ready for the party as the sun goes down

The outdoor amphitheater – this is where the party began

Next we walked to the Rebecca Gale Telescope Park, where we used the various telescopes to get a closer and more isolated look at several stars, planets and the moon. Each telescope was manned by a knowledgable and enthusiastic staff member who knew his/her astronomy.  There were nine telescopes available that night, and we waited patiently in line several times for our turn to view a young star, Jupiter and its two moons, Venus and our moon.  Steve’s favorite was Jupiter, but for me it was the dazzling Venus. Although it got a bit chilly as we waited, we had a very enjoyable night with the stars – it was awesome!

Even if you aren’t really into astronomy or star-gazing, viewing the sun, moon and planets through large telescopes under cloudless night skies is a wonderful experience.  Click here to learn more about the McDonald observatory.

And that was just one of the many activities we enjoyed at Davis Mountains – there’s more to come!

A sunset view of the Sleeping Lion rock formation from Skyline Drive near our campground, with Ft. Davis in the background