Having driven and hiked around Big Bend NP,  we added another layer of adventure – floating down the Rio Grande.  This was a full day canyon float with Big Bend River Tours, and we had to make reservations well in advance since spring break was underway during our visit.

The route and type of vessel (canoe or raft) used each day is dependent on the water level of the river.  On the day of our trip, the water was coming up due to recent rains, and we took rafts – which was fine with us.  The guides had also decided our route would be down Hot Springs Canyon.  We were excited about that, as we had not explored Hot Springs Canyon at all so far. 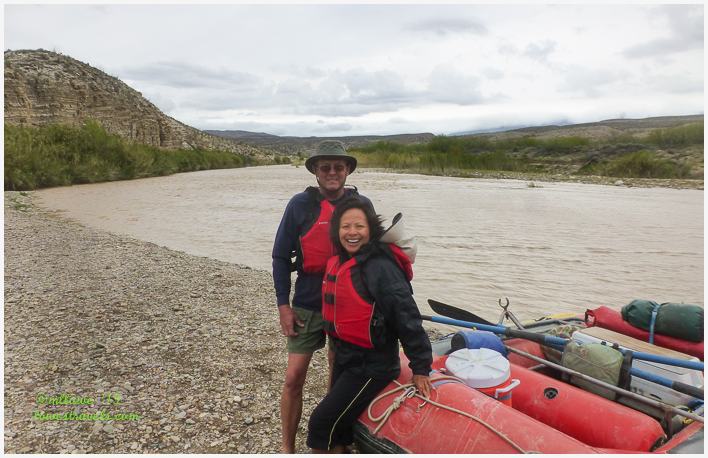 All ready to go in our snazzy new red vests

The Rio Grande (Spanish for “Big River”) flows south and east for 1,885 miles from its origin in Colorado, eventually passing through the park before emptying into the Gulf of Mexico.  At Big Bend, the river forms the 118 mile-long southern boundary of the park, coursing through three major canyons – Santa Elena, Mariscal, and Boquillas – before heading into the Texas desert.  A huge left turn in the river here gave the park its name – Big Bend. 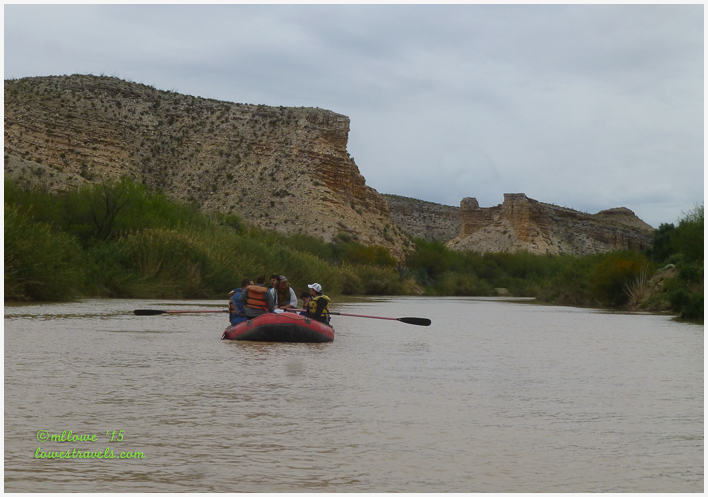 We floated leisurely down the river during the first half of our trip, admiring the beautiful scenic canyon.  We saw many areas of exposed limestone and layers of rock carved by the river and wind.  We finally landed on a beach for lunch, and were given an hour to explore the Hot Springs Historic District while the crew prepared the goodies.

Most folks went straight to a small naturally-flowing 105°F hot springs on the banks of the Rio Grande for a soak.  Steve and I checked it out, but we decided to explore what remained of a high-end resort that was built here in the 1930’s.  We can boil ourselves in hot water with complete strangers another time! 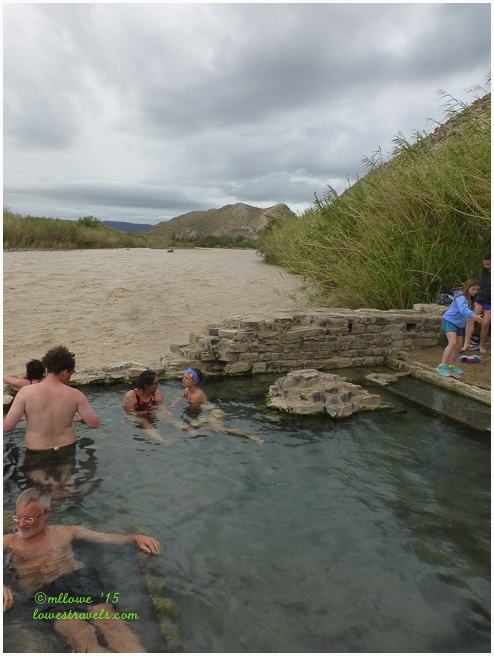 Hot Springs right next to the Rio Grande, it was full of people a few minutes after this shot

In 1909, J.O. Langford came to this very remote part of west Texas after hearing about a healing hot spring.  He bought a homestead here and when he was cured of his ailment after a 21-day treatment, his entrepreneurial spirit kicked in and made this place a health spa centered around the hot springs.  He built an adobe house, a stone bathhouse, and brushwood bathing shelters.  There was also a store and motor court, consisting of seven attached cabins. 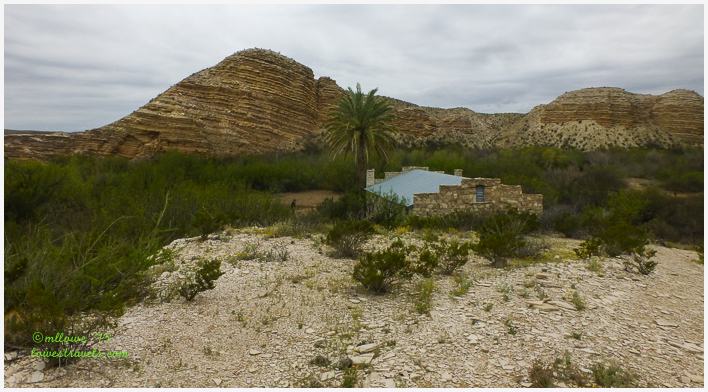 Today, the remains of what is left of a tourist site in the early 20th century are being preserved to demonstrate a rich history of human occupation in this remote place.  Even now it’s hard to imagine living and thriving in this harsh environment. 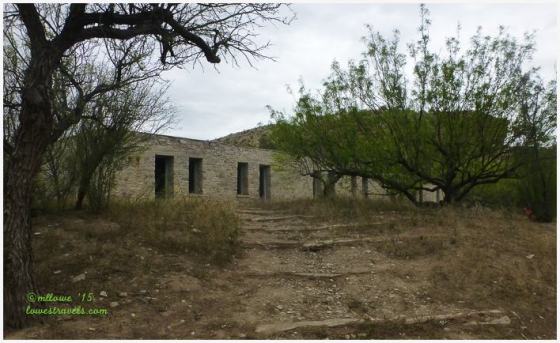 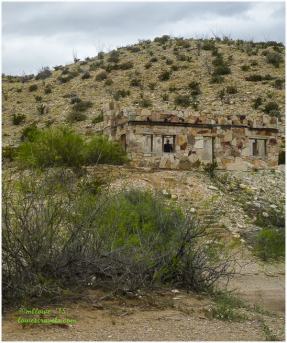 We walked along stratified limestone and Steve noticed some layers sticking out. 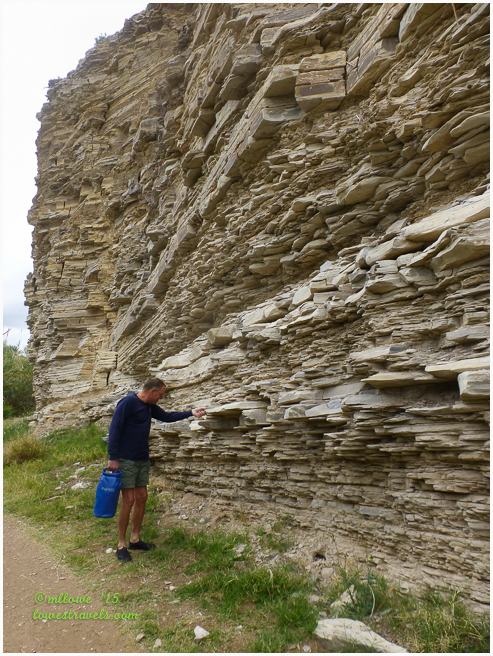 Steve couldn’t help himself, playing Jenga and wondering if the whole mountain would collapse if he removed a piece. 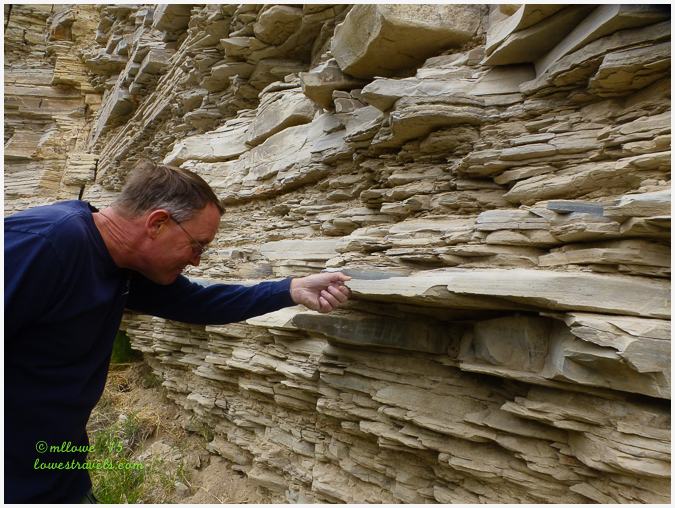 Hmmm, will the mountain  topple?

We really came at the right time – wildflowers were making me smile, stop and snap their blooming beauty! 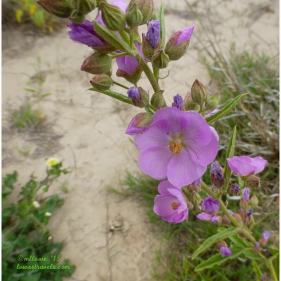 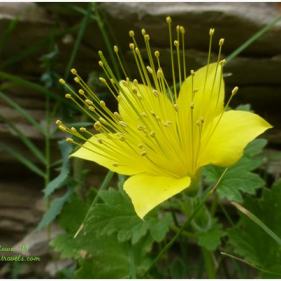 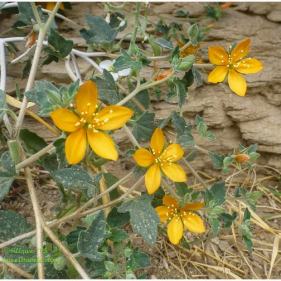 With the hour of exploration over, we enjoyed a pretty good spread for lunch.  It was very relaxing taking in the various rock formations on both sides of the river as we munched. 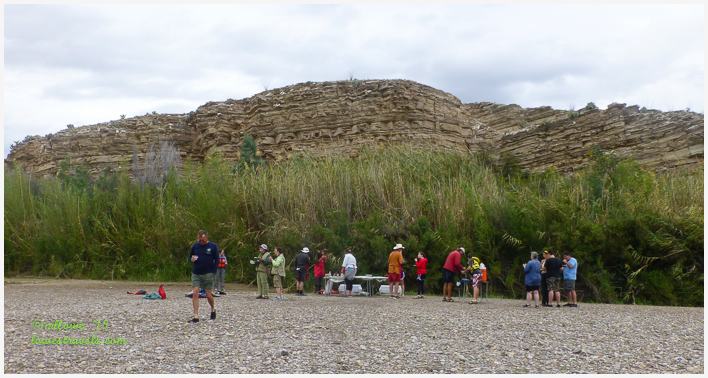 Heading back out onto the river, we discovered a pretty good headwind had developed, and Steve lent a hand in paddling.  We floated past the hot spring and noticed that the crowd had grown even larger: 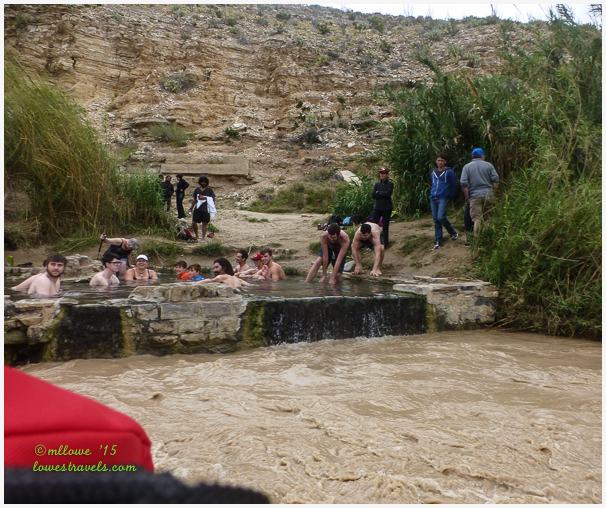 Hey, is that guy in the glasses peeing in the tub? 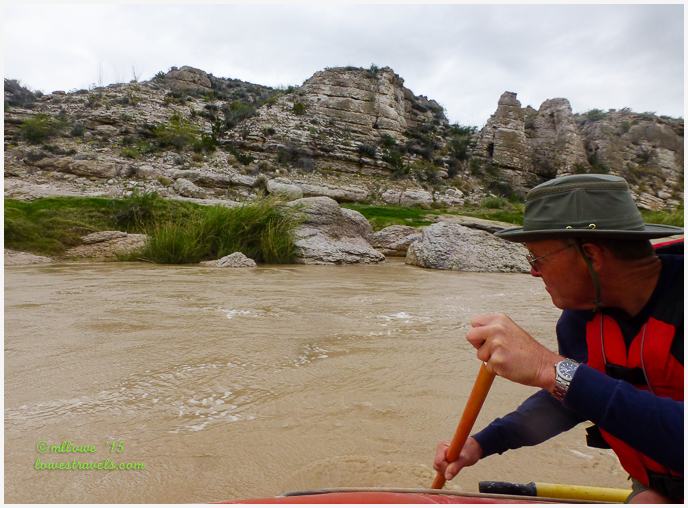 Steve assisting in the effort

Here’s what we saw during our second stretch on the river: 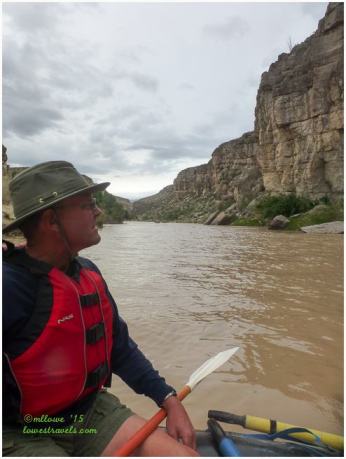 Looking up to what he thinks … 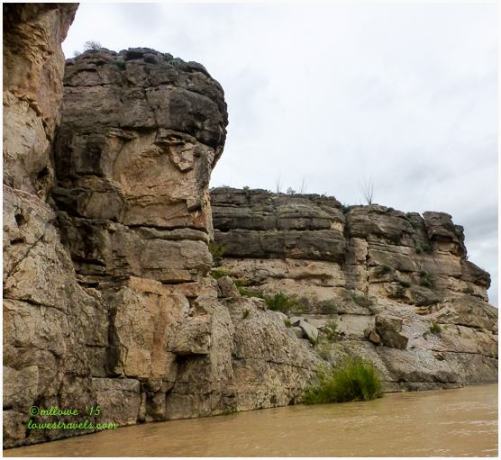 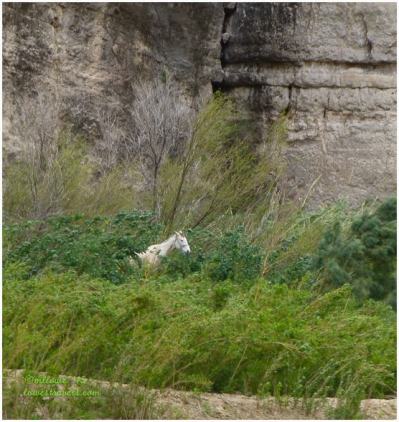 A horse on the Mexico side 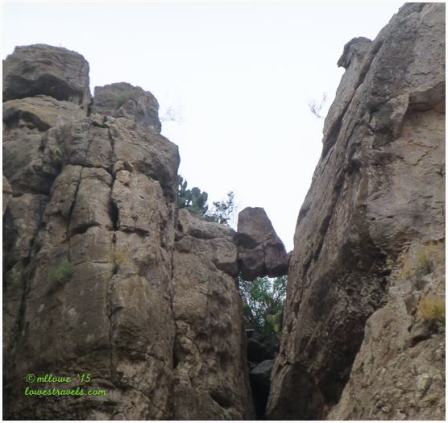 How did that rock got stuck? 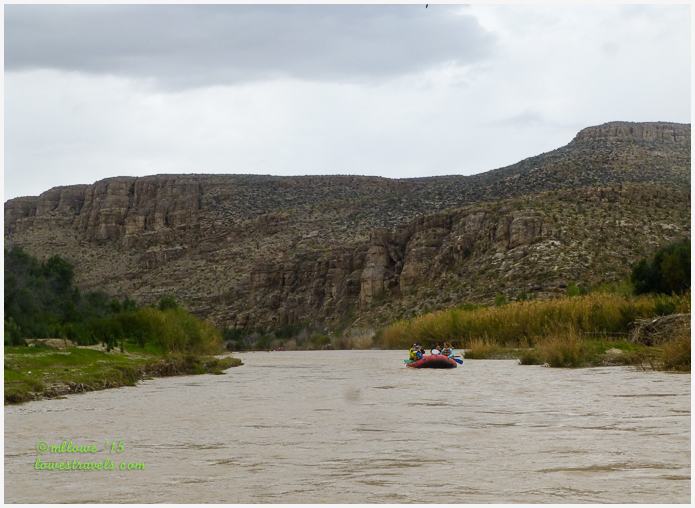 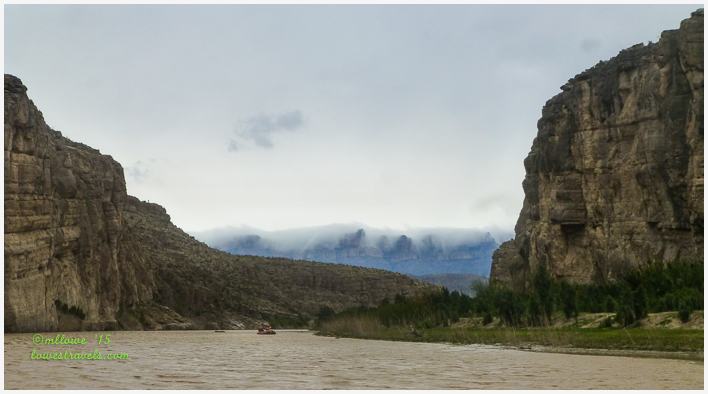 As we entered a bend, the Sierra del Carmen in Mexico came into view, topped with clouds

By the time  we unloaded from the raft, the wind had really picked up and it began raining a bit.  Perfect timing – and another fantastic day at Big Bend! 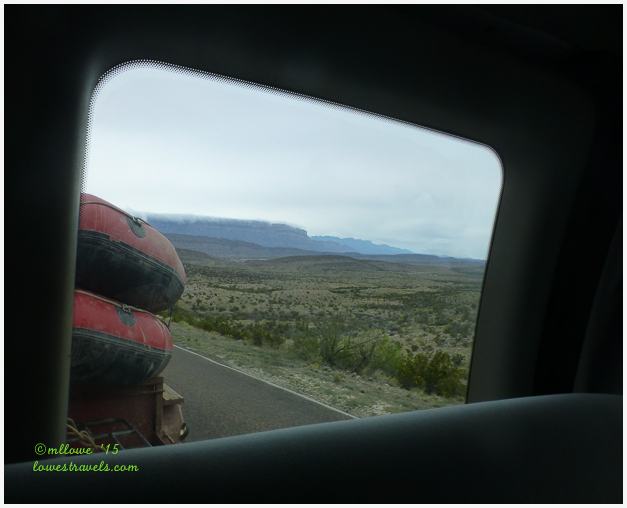 That concluded our river trip, then just another 45-minute drive out of the park back to Betsy!