With a cold front at our heels, we continued our southward migration and headed to an area in Oklahoma known for its glorious mountains and wilderness areas – Chocktaw Country.  When I think of Oklahoma, I imagine vast plains, tornadoes and generally bad weather.  It was a pleasant surprise to see mountains with fall colors on the horizon as we crossed the border from Arkansas.

We had planned two stops in the Sooner State – first in Hodgen, camping at Big Cedar RV Park (Steve’s review here), then in Broken Bow at Beavers Bend State Park (review here). Both locations were known for their fall foliage.  What?  Did she say fall foliage in Oklahoma?  Hmmm, we shall soon see. 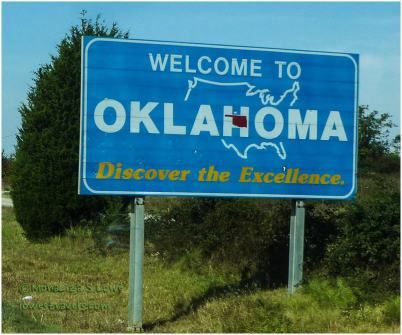 Our first camping home base was located in the Kiamichi valley, surrounded by forested mountains and just a few miles from one of Oklahoma’s renewed scenic drives, the Talimena National Scenic Drive (TNSD).  I may be partial to the Blue Ridge Mountains in North Carolina (click here for my stories) or the Skyline Drive in Virginia (here’s my post), but I have to say Oklahoma has its own gem which we were about to explore.

Designated by the U.S. Department of Transportation as an official National Scenic Byway, the Talimena Drive was built specifically to highlight the area’s beautiful foliage.  It runs East to West for 54 miles along the crest of Rich Mountain and Winding Stair Mountain in the Ouachita National Forest (pronounced Wash-i-tah).  It is highway 1 on the Oklahoma side and highway 88 in Arkansas.

We took advantage of our campground’s location right at the midpoint of the byway. Taking two days, we drove half of the route each day so we could tackle some hiking opportunities along the way.  One day we headed to the east, where the byway ended at Mena, Arkansas.  The next day was a westward trek to the end at Talihina, Oklahoma.  As you may have guessed by now, Talimena is derived from the name of the towns at both ends of the drive.

We were here during the last week of October, and the foliage was showing just light yellows and patches of autumn colors on the still mostly-green trees.  We stopped at every overlook and enjoyed panoramic vistas of forested peaks in Quachita National Forest. Especially during the early morning hours, we saw areas with shades of green in the foreground forests and blue haze in the distant mountains. 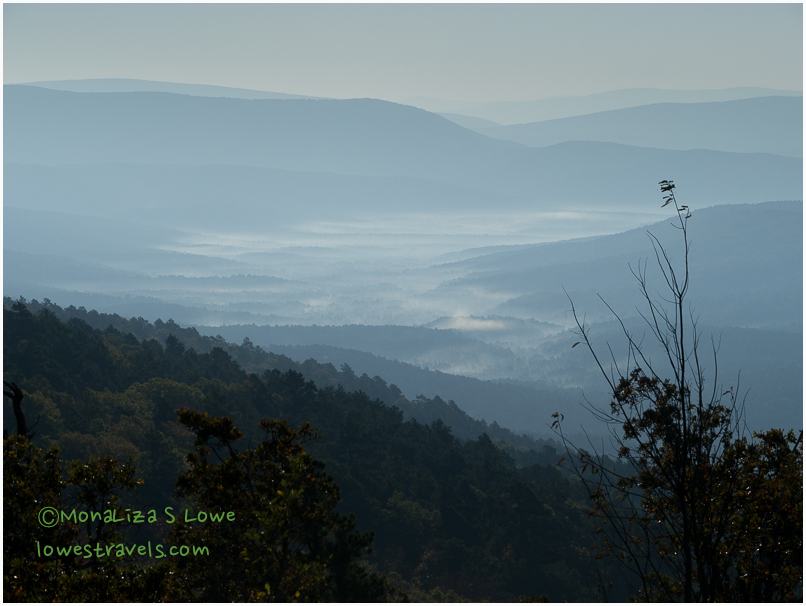 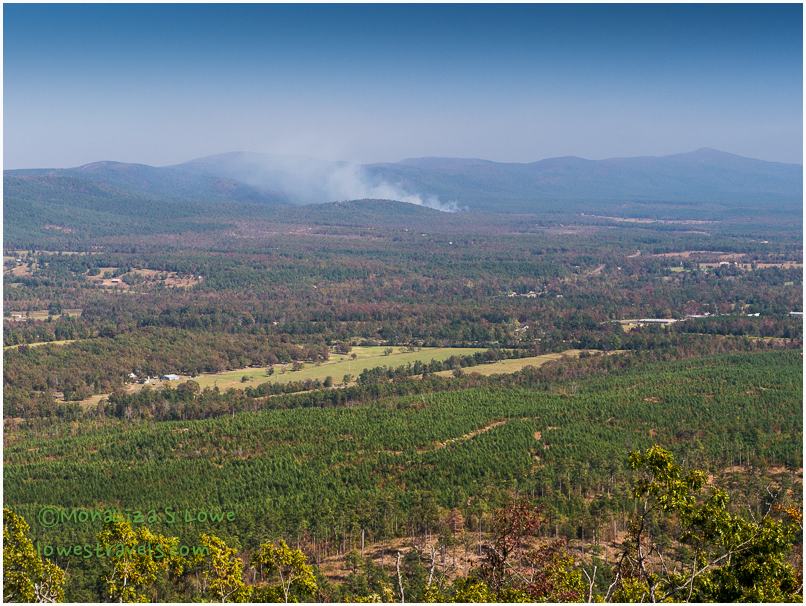 Looking down at the town of Acorn, Arkansas

Many of the turnouts had exhibits/plaques that explained the natural and historical significance of the area.  The image below was taken from Emerald Vista, and we learned that in 1930 the area in the picture was completely denuded by the logging industry.  As a result, it was appraised with no commercial value at that time.  The only bidder willing to purchase the area from the Buschow Lumber Company was the U.S. Forest Service, and they got quite a deal – 48,257 acres for $1.42 per acre!  Today it’s managed for all of us to enjoy as the Indian Nations Nationals Scenic and Wildlife area.

The twists and turns over the gently rolling Quachita Mountains is a popular drive for all kinds of vehicles – including some antique ones.  At one of the vista overlooks, we saw two Model T’s parked and creating quite a stir among the folks there.  Of course, Steve had to do a mechanical inspection of these unusual cars, and while talking to one of the owners we were able to get an invitation for me to sit in his cool ride for a picture!

Trying to figure out how this unusual (and original) engine works

Besides the scenic drives, we found other interesting things to do.  We chose to check out the controversial Heavener Runestone.  It’s a large inscribed stone slab about 12 ft. high, 10 ft. wide and 16 inches thick, located in Heavener Runestone Park.  It has very unusual “runic” letters inscribed on it.  Turns out that a rune is an ancient Scandinavian form of writing used on gravestones, charms or property markers.  A short walk down a hillside led us to the area where the slab was found and subsequently moved into a building that protects the ancient rock.

This is a beautiful place to take a walk, even if you don’t care about the Runestone. And it’s free!

The theory of Vikings roaming around prehistoric Oklahoma is controversial.  It is said that the rune inscriptions are of Viking origin, demonstrating a Norsemen exploration of the area.  But there is considerable debate over their age and validity.  As of now the official theory is that this particular slab was erected as a property boundary marker between 600 A.D. and 900 A.D. 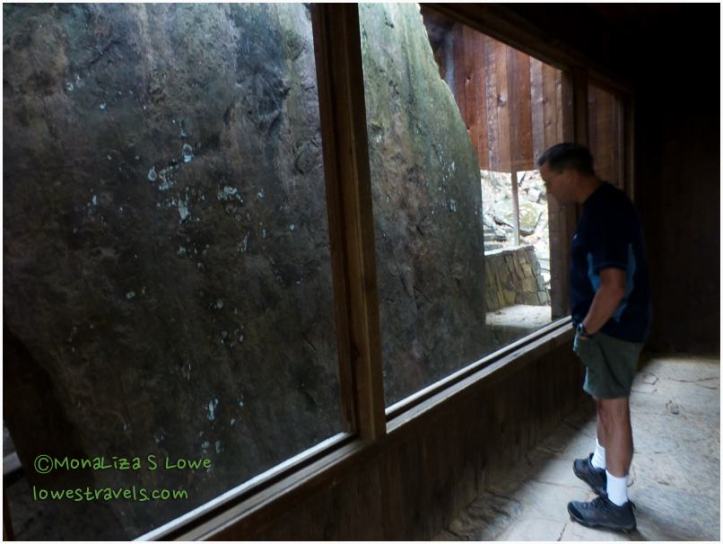 The ancient slab is encased in a display built for it

Close-up of the Inscription.  There are different theories as to the translation of this one

On our drive home we spotted a pod of Pelicans swirling overhead and landing on a lake.  I exclaimed, “Oh my goodness, they’re following us from Iowa!”  After slamming on the brakes for a picture as I have trained him to do, Steve just rolled his handsome eyes 🙂 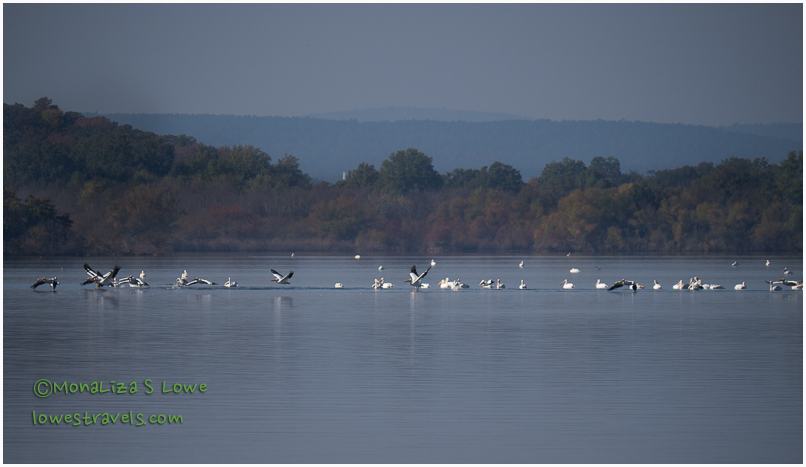 There was a threat of a storm and rain (big surprise in Oklahoma, right?), but it did not deter us from following some of the trails in the area.  Although we didn’t get wet, the wind was blowing pretty hard as we walked along.

Not what you want to see when preparing for a hike

The longest trail in the forest is the Quachita National Trail, spanning 192 miles – a bit longer than our usual jaunts.  Instead, we followed some of the short trails that intersect with it.  The Mountain Top Trail was only 1.7 miles long, and it took us to the north side of the mountain where some leaves had changed colors and others had already fallen.

Steve loves walking on this kind of “carpet” 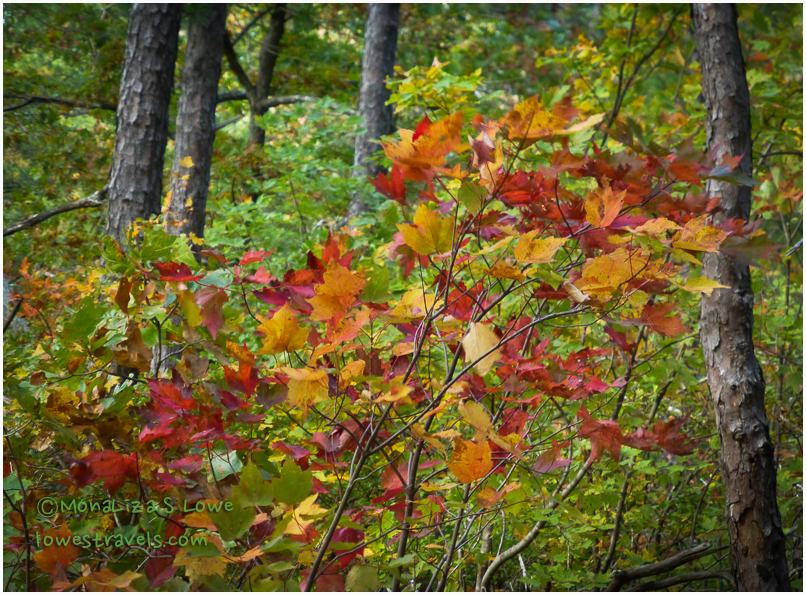 After 3/4 of a mile, we reached a spot where rocks and boulders formed a point overlooking Holson Valley and the Talimena Scenic Drive as it continued west along the mountaintop.

Next we followed two Kerr Arboretum Trails located at the Kerr Nature Center.  One trail told a fascinating story of how a tree competes with other inhabitants for survival, and the other explained the process of soil formation and its importance in the forest life cycle.

Both trails were easy and fairly short, and we thought they were very informative and well done.  Each wooden plaque along the trail had a concise explanation of what had happened in the area around it, and we learned quite a bit about the variety of ecological components that exist here. 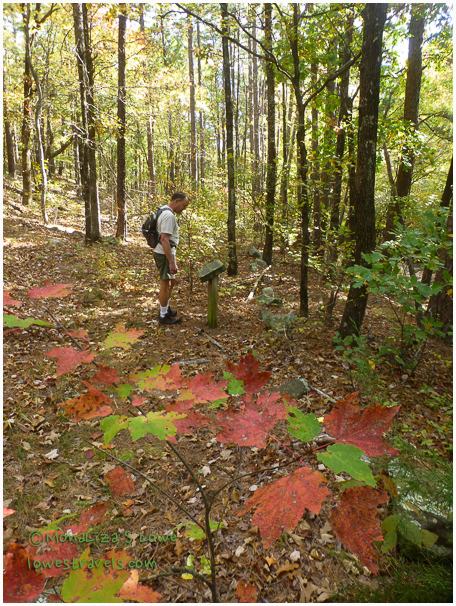 Even the porta-potties were displaying their fall colors

For our final hike we drove to one of the COE’s (Corp of Engineers) projects that created Cedar Lake.  Here we followed a 3-mile loop that circled the lake.  Under cloudy skies we followed this easy trail, which had only a few small elevation changes.  It stayed close to shore most of the time, providing many scenic views of the lake, the fall foliage and surrounding mountains.

The pretty trail at Cedar Lake

I enjoyed looking at these shrubs which are  just about to show their fall hues: 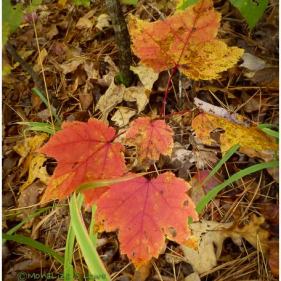 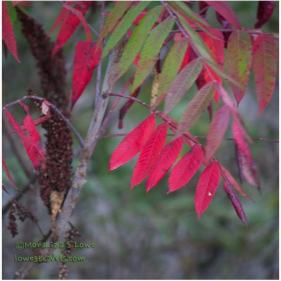 Cedar Lake with Winding Stair mountain in the background. Perhaps by this time first week of November, the fall foliage may already have peaked.

Finally,  a decent sunset from one of the few overlooks that faced west, aptly called Sunset Point vista.  Hey, it’s not like Arizona’s sunsets, but it’s the best I can do here!

Having driven and explored the 54-mile Talimena National Scenic Byway, I can say with confidence that it holds its own against the Blue Ridge Parkway and the Skyline Drive.

Next up:  The beauty of Beavers Bend State Park

Categories: Oklahoma, Where we have been