We continued northward from Paradise (#3 on the map) to visit the graveyard of Lake Superior, Whitefish Point (#4).

Steve was fascinated by the stories he read about the hundreds of ships sitting on the bottom of Lake Superior, many of them quite near Whitefish Point.  It turns out Whitefish Point is a relatively narrow and high-traffic area where many ships passed through in opposite directions.  A surprising number of wrecks occurred as ships simply crashed into each other due to navigation errors or bad weather.  Although small, the Shipwreck Museum contains many maritime artifacts and interesting displays that tell the stories of the ships and sailors who braved the waters of lake Superior – and of those who were lost there. 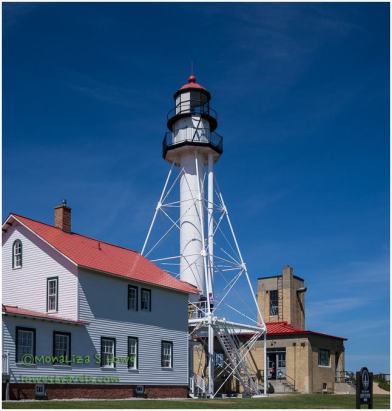 The loss of life on the Great Lakes was unbelievable – especially along this stretch of Lake Superior’s shoreline. One display mentioned that of the 6000 ships lost, the SS Edmund Fitzgerald remains the most famous and mysterious.  It is a featured exhibit in the museum. Every man on her crew perished, on Nov 10, 1975 and today the vessel remains twisted and broken at the bottom of the lake just 17 miles from Whitefish Point, at a depth of 535 ft. 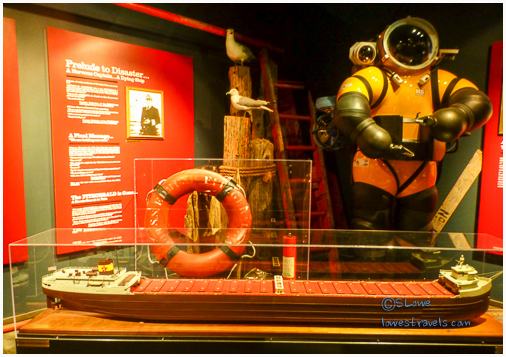 At the urging of the crew member’s families, the ship’s bell was raised from the depths to honor the 29 men lost.  It also serves as a reminder of the 30,000 men, women and children lost to shipwrecks on the Great Lakes.  That is a staggering number!

We took a stroll along Lake Superior’s pristine shoreline after visiting the museum, and marveled at its clear water which reminded us of the aquamarine waters in Barbados. 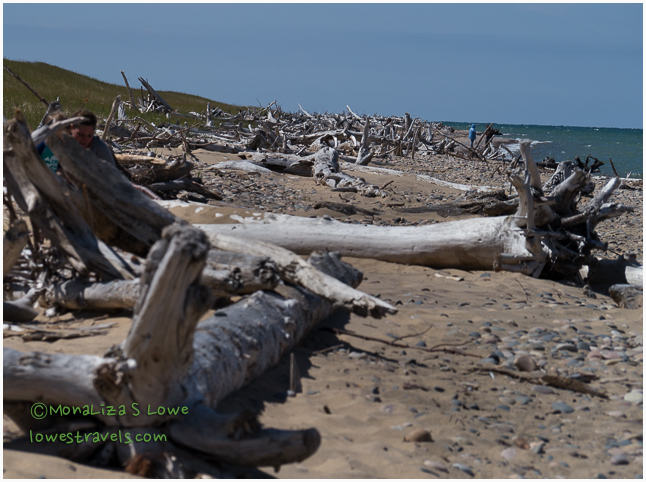 Everyone seemed to be looking for unique stones or other goodies

Although Steve wasn’t sure if he would enjoy this museum, he had seen plaques at other places and the stories of the wrecks fascinated him – so he decided to give it a try.  He’s glad he did, and he recommends it to anyone coming into this area.

Pasty or Pastie – that is the question

As we quickly learned back in Mackinaw City, a Pastie (pronounced pass-tee) is a baked pastry consisting of a crust filled with diced potatoes, rutabagas, carrots, onions and ground beef (or other meat), and seasoned to perfection.  It is one of the staples of the Upper Peninsula, brought here by the copper and iron miners from Cornwall , England.  We could not resist giving them a try, and we enjoyed them so much that we ended up buying a half dozen more to keep in the freezer for future meals! 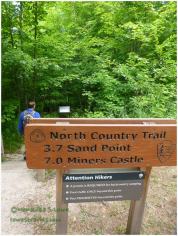 On another day we drove to the attraction furthest from our home base, the first national lakeshore designated in 1966 – Pictured Rocks National Lakeshore (#5 on the map above). We learned that the best way to view the cliffs is by water, so we made reservations far in advance for the popular Sunset Cruise, which is authorized by the National Park Service.  Since the park is quite a drive from Newberry, we made use of our limited time there by arriving early and tackling one of the many hiking trails, before leaving on our 7:15pm boat cruise. 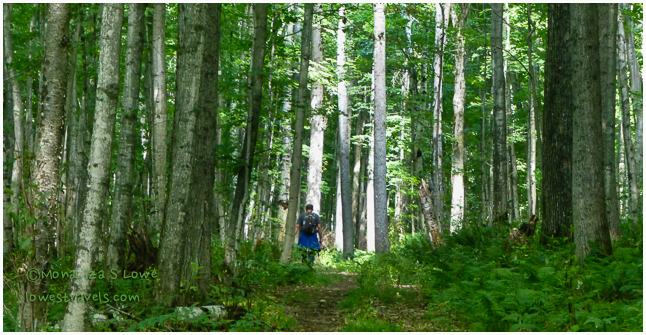 We followed a short segment of the 42-mile North Country Trail, which follows the lakeshore.  It ran 3.7 miles from Visitor’s Point up to Sand Point.  The map made it look like the trail would take us on a scenic route at the top of the sand cliffs, but it actually ended up running more inland through forested areas with lots of vegetation, before ending at the lakeshore.

First half of our hike ended up here at Sand Point

Since it wasn’t a loop and we prefer not to follow the same trail twice, we ended up walking along the road from the Park Headquarters back to the parking lot.  Fortunately there were no mosquitoes, but I was a bit disappointed that we didn’t hear any birds at all. It was just a moderate hike, and we enjoyed being the only people on the trail. We saw very few flowers during our 8+ mile trek, but I was able to capture these along the road back:

We arrived back in town just in time to pick up our tickets for the cruise, and we were informed there would be high swells and white caps during the trip.  We were offered a chance to cancel with a refund or reschedule, but as this was only our day here we opted to take some Dramamine and go for it.  We were unable to get a seat outside on top of the boat, so we went into the enclosed lower area.  That turned out to be a good move, as it got very chilly and windy later in the trip.  After the captain gave folks one last chance to cancel or reschedule their trip (nobody did), we were off. 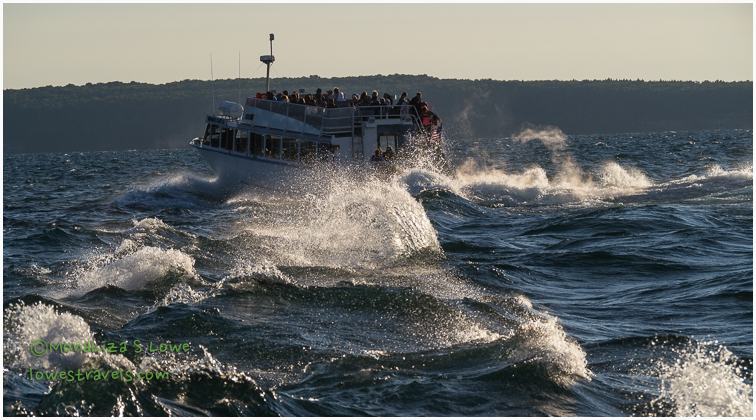 The lake was angry that day!

The cruise lasted about 2.5 hours and covered 15 miles of the colorful sandstone cliffs known as Pictured Rocks.  This is only a small section of the 42-mile long Pictured Rocks National Lakeshore.  These cliffs rose up to 200 feet above lake level and were sculpted by water and time.  Our tour guide and captain did the narration, as he pointed out what to look for on the cliffs, and informational tidbits about each one.

Indian Head – can you see it at the end on the left? 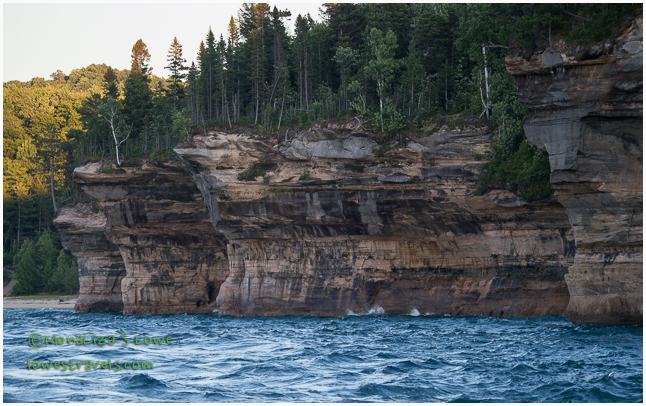 Battleship Rocks – how many can you count?

The cliffs have been sculpted for over a million years, being battered by crushing ice and the lake’s water, which have carved the bedrock into cliffs.  The same forces continue today, constantly changing the shallow caves, arches and formations.

This one is called Lovers Leap, but don’t try it – the water is only 2 feet deep there!

Incredibly, those are roots stretching across what used to be an arch but eroded away over time.  The tree on top is still alive! 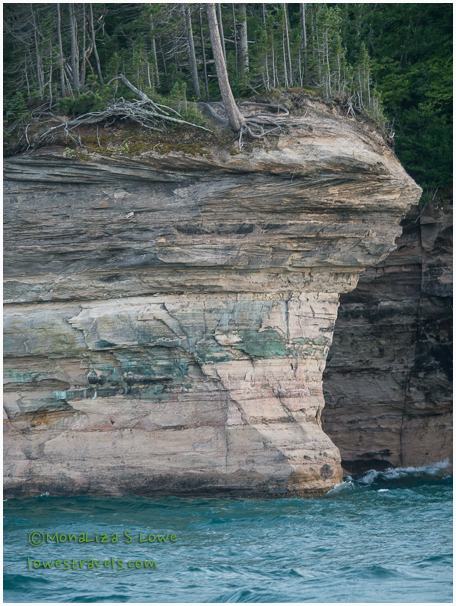 What creates the colors?

The name Pictured Rocks comes from the streaks of various minerals staining the face of the sculpted cliffs.  Streaks on the cliffs occur when groundwater oozes out of cracks in the rock, each mineral (iron, manganese, limonite, copper and others) leaving its own unique color.

I’ll just let the pictures show you how colorful and amazing the rocks are. 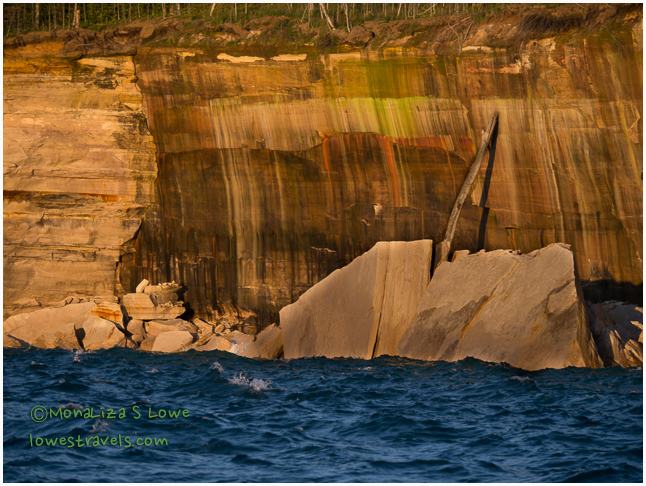 Doesn’t this look like a water color splashed on the wall?

This is where the gulls take their breaks 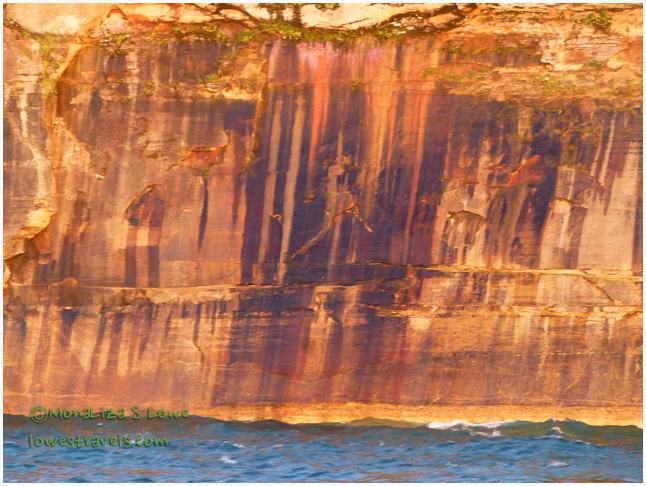 Can you make out the three shapes and forms on the wall?

Are they amazing or what?  This place of beauty makes me think there’s a busy artist painting the rocks, leaving a mesmerizing palette of nature’s colors, shapes, textures and forms.

If you are in the U.P. and able to pick only one natural attraction, this is the one not to be missed.  I just hope you have a little smoother ride than we did – several people spent their trip hanging over the back rail doing you-know-what!

With 84% of the U.P. covered by forest, we felt like we were in the wilderness most of the time – with the exception of the busy Tahquamenon Falls.  But we wrapped up our visit thinking that we got a good feel for the place, and very happy that we came!