We all know the first thing that comes to mind when we think of Florida – lots of white sand beaches!  Fortunately for us, our home base at Bonita Springs was just minutes from several beautiful beaches, natural preserves, shopping and restaurants and other fun things to do.  The unseasonably wet and cool Florida winter did not deter us from taking long walks while exploring those beaches.  And you may say a beach is just a beach, but on our walks we encountered beach scenes that brought smiles to our faces and made our walks seem less for exercise and more for relaxation.

Barefoot Beach is on the same land mass – Little Hickory Island – as Bonita Beach.  The south end of the island is home to 342 acres of natural land, one of the last undeveloped barrier islands on Florida’s southwest coast.  Following the nature trail, a tropical coastal hammock of sabal palm, gumbo-limbo and sea grape trees, among many others, were visible along the trail.  What we particularly liked on this trail was that the plants are not only tagged, but also shown in photographs as they look during each season.  The trail then lead us to a shell-filled, sugar sand beach that could be painful when walking barefoot (no pun intended).

The beach offers some of the best shelling opportunities along the Gulf Coast, and walking here can be a “crunchy” experience.

One of our neighbors made these “shell balls”

Bonita Beach has been named a top 10 destination beach of southwest Florida.  The sun worshippers here were mostly snowbirds, so much so that a sign protecting the real snowbirds was posted and it made us smile.  We took several long walks here, and each day brought surprises and a new backdrop of scenery. 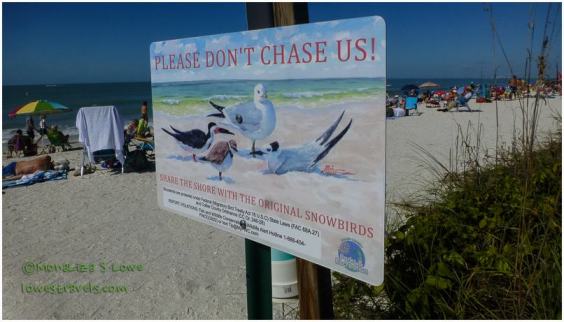 Foggy and 70 degrees, Steve hadn’t seen that before and asked the locals about it. 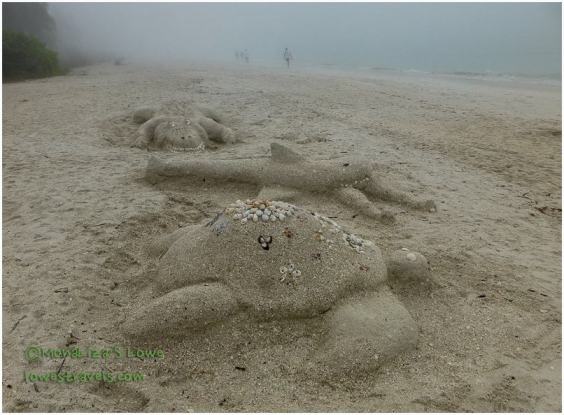 I explained to these guys that I love ALL birds! 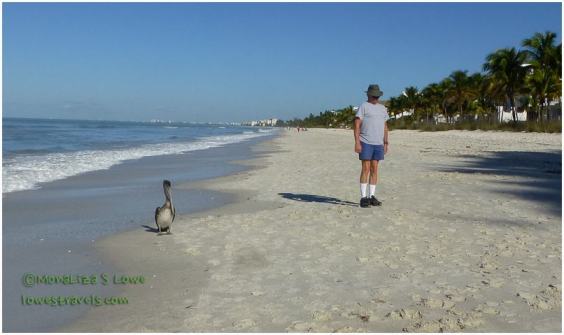 One looks very cool, the other just looks dorky… 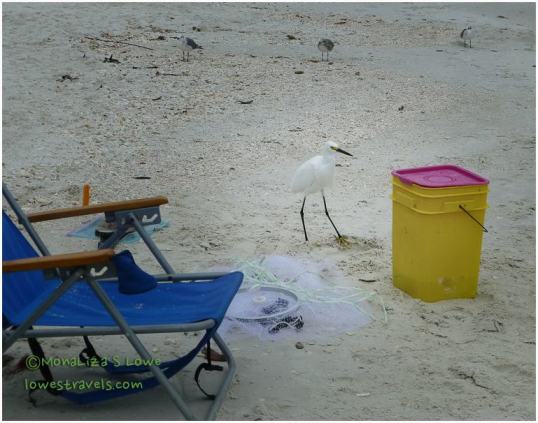 When the sun did peek out, the worshippers came in full force:

Lovers Key is a 2.5-mile stretch of beautiful beach along the Gulf of Mexico.  There was a guided bike tour on Wednesdays, and we attended one to learn about the history of the island.  According to our guide, the island was accessible only by boat in the early 1900’s. It was said that only lovers would make the effort to get to this romantic island – thus the name Lovers Key.  Today it is one of four barrier islands that make up this state park. After a brief talk she led us through a maritime hammock along the canal banks of Black Island, pointing out how this area is a haven for wildlife. 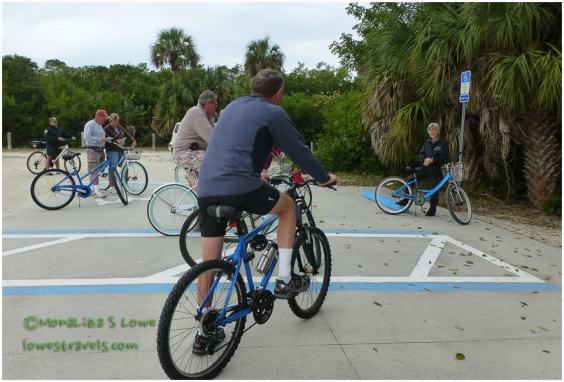 Preparing for our low-speed bike tour

The sea grape trees are abundant along the beaches. 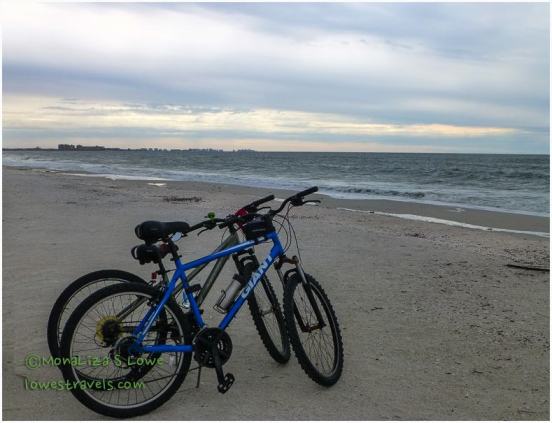 We had planned to go to the beaches of Sanibel and Captiva to check out the great shelling for which they are famous.  Low tide is considered prime shelling, however, at low tide the wildlife viewing is at its best at J.N. “Ding” Darling National Wildlife Refuge. This is when the birds are feeding on the exposed mud flats.  Choosing between wildlife viewing and stooping for shells was no-brainer for me – I’ll go for the birds in a heartbeat. The shells, well they don’t move around so much! 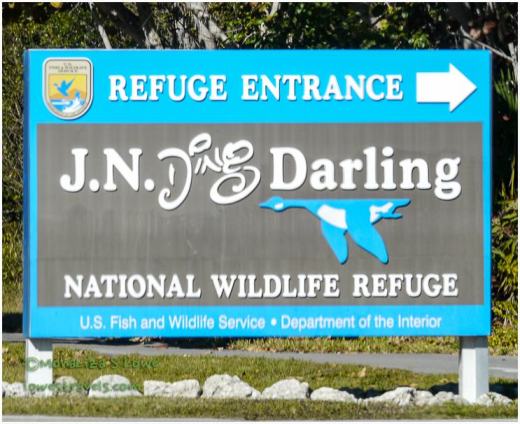 Thanks to a political cartoonist with an eye toward conservation, Jay Norwood “Ding” Darling was instrumental in the effort to block the sale of a parcel of environmentally valuable land to developers on Sanibel Island.  At Darling’s urging, President Harry S. Truman signed an executive order creating the Sanibel National Wildlife Refuge in 1945. It was renamed in 1967 in honor of the pioneer conservationist.

The “Ding” Darling Refuge is located on the subtropical barrier island of Sanibel in the Gulf of Mexico.  The refuge is part of the largest undeveloped mangrove ecosystem in the United States and is famous for its spectacular migratory bird populations.  And boy were there lots of birds!  This is a birder’s and photographer’s paradise.  It was a delight to see the number and quantity of birds during our drive around the 4-mile loop. Without a super-zoom camera I could get only a few decent shots, below and my header.

One of my favorites, the Roseate Spoonbills have been elusive to me so far

But if you want to get an up close image of the pink birds (Roseate Spoonbills) check out Ingrid’s great photography and write up about them beauties. 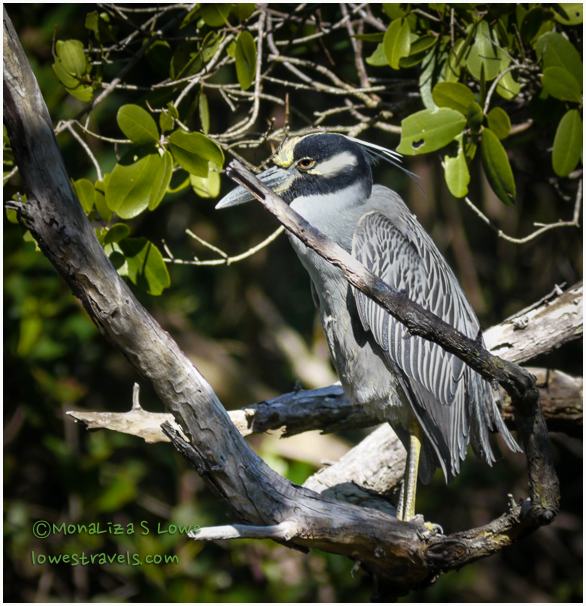 Yellow Crowned Night Heron, one of my new bird sightings

We spent so much time at the refuge that shelling at one of the beaches in Captiva or Sanibel will just have to be postponed for another visit.  Steve was so disappointed – not!

We thought our one-month stay at Bonita Springs could get boring, but it turned out to be full of socializing, encounters with wildlife and long walks on the beaches of southwest Florida.  Not to mention productive, as several repairs and upgrades on Betsy were completed by Steve.  Great stop!

Categories: Florida, Where we have been