After walking much of Manhattan with our friends, we took a tour by boat that had been recommended to us.  We think this is a great way to see Manhattan from a different perspective – after all, it does have the world’s most famous skyline.  We chose to take the Full Island Cruise offered by Circle Line, which gave us a good tour all the way around Manhattan in 2.5 hours.  To get there, we hopped on the PATH train in Jersey City and went 2 stops to the World Train Center station in Manhattan.  Then we made the short walk to the subway and took the E line to 42nd Street, finally walking four avenue blocks to Pier 83.  Hey, just getting there was half the adventure!

Next to Pier 83 where we boarded the boat is the Intrepid Sea, Air & Space Museum, where a British Airways Concorde is on display.  Unfortunately, we didn’t have time to visit that museum, where we could have checked out the the fastest commercial aircraft to ever cross the Atlantic Ocean.  Maybe we’ll see one in DC. 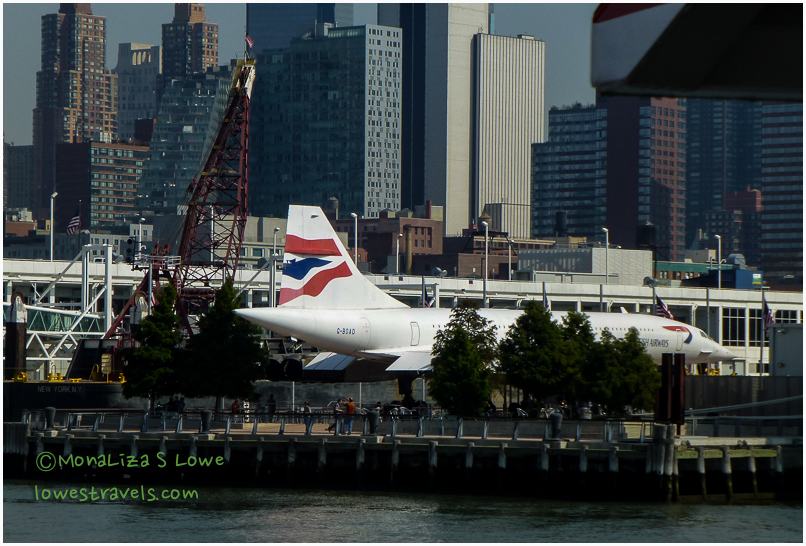 Departing from the pier, the tour guide began sharing his in-depth knowledge of the city.  From him, one could really get a sense of the size of Manhattan and the 5 surrounding boroughs.  He helped us to keep our bearings, for as we passed by each landmark he would mention which subway line(s) stop closest to it.  It was a very good tour, and relaxing on such a beautiful day.

World Trade Center One is now the tallest building in the U.S.

This area of the Hudson River is where Captain Sully performed his miracle landing on the river in January of 2009.  Circle Line was one of the many first responders to the incident. 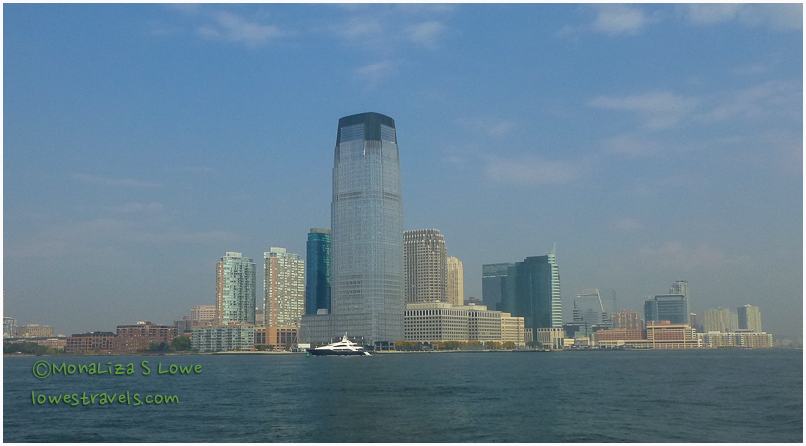 Jersey City skyline with Goldman Sachs Tower in the foreground, called the “lipstick building” by locals.

Thanks to the government shutdown, Lady Liberty was left standing alone on this day, and Ellis Island looked deserted as well.

Manhattan is an island whose name is derived from the word Manna-hata, as written in a 1609 logbook.  It was subsequently translated as “island of many hills” from the Lenape language.  We saw only a few hills as we cruised around the northern end of the island, perhaps the high rises have hidden some them.  Speaking of high rises, american architects consider 12 stories or higher to be a high rise.  New York City easily leads the U.S. list with over 6,000 high rise buildings, and Chicago is a distant second with “only” around 1,100.

Being an island, Manhattan is linked to NYC’s outer boroughs by numerous bridges, large and small.  On this day we passed under nineteen of them!  The first three major ones we cruised under, which the tour guide called the “B-M-W” bridges, were the Brooklyn Bridge, (seen on my header), the Manhattan Bridge and the Williamsburg bridge.

Brooklyn Bridge – pedestrians and bicyclists can also get across here. 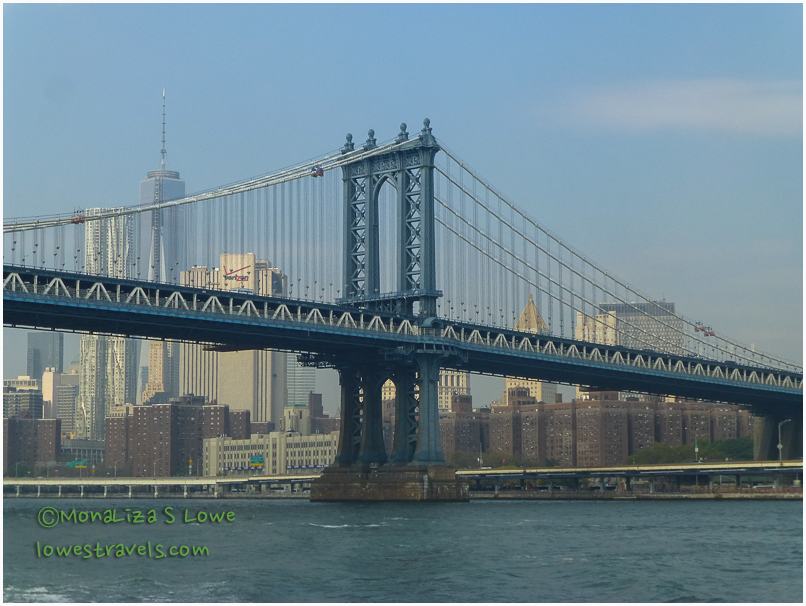 And the bridge that Betsy crossed while on I-95 S a few days ago – the George Washington Bridge – is considered the world’s busiest motor vehicle bridge.  It connects upper Manhattan with New Jersey.

Leading to the new Yankee Stadium were 6 street bridges with low clearances.  The tour guide repeatedly warned the Yankee fans on board that we might not be able to see the stadium because it was high tide and the boat might not clear.  Well, with just a few inches to spare, the boat inched very slowly under all 6 of them. 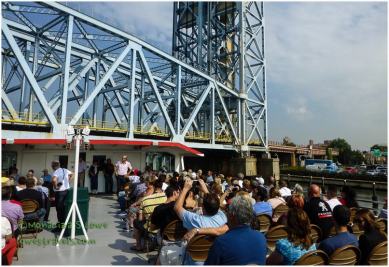 A few inches to spare…

The tour gave us views of Harlem, Gracie Mansion, the Upper East Side and many other areas of the island.  Culling through many pictures, I chose some which depict the fascinating diverse Manhattan skyline.  Here are a few that caught my attention, featuring golden rooftops as well as green ones:

On the Upper East Side we saw luxury apartments where many celebrities reside, their rooftops decked with trees.  We noticed a “nurse’s co-op housing” with color-coded doors.  Neither Steve nor I could remember why the guide said they were painted that way – it had something to do with helping the nurses to find their rooms. 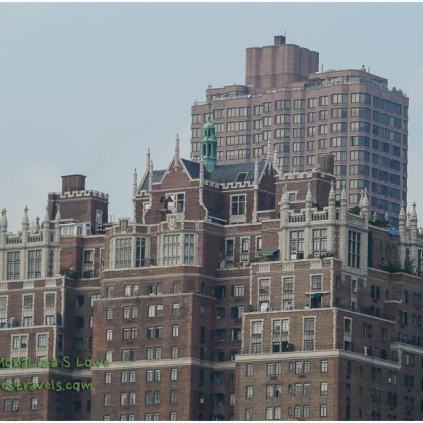 According to our guide, approximately 10,000-15,000 water tanks reside on building roofs across the boroughs.  Buildings higher than six stories need the tanks because the city’s water system is unable to supply sufficient water pressure to tall buildings.  The tanks are filled by pumps in the building’s basement, and water is supplied from the tank to users via gravity only.  Wooden tanks are by far the most popular because of their insulating properties and low cost to construct. 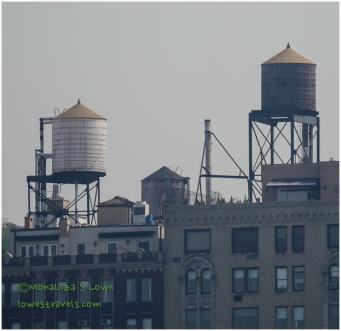 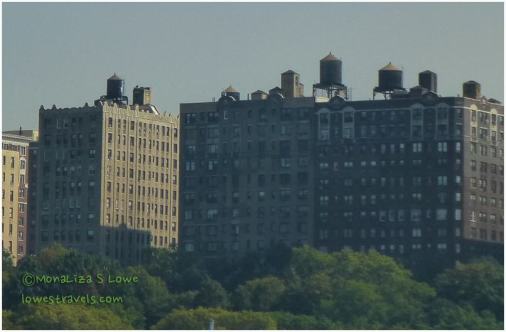 Our knowledgeable guide helped us to learn a lot about Manhattan Island, NYC and the diverse people who live there.  Once docked, we still had plenty of time to do some exploring on our own.   We walked uptown, where we checked out the ubiquitous food vendors and clever pedicab drivers competing with their per-minute rates: 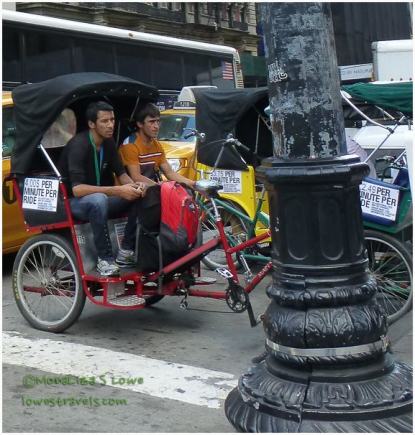 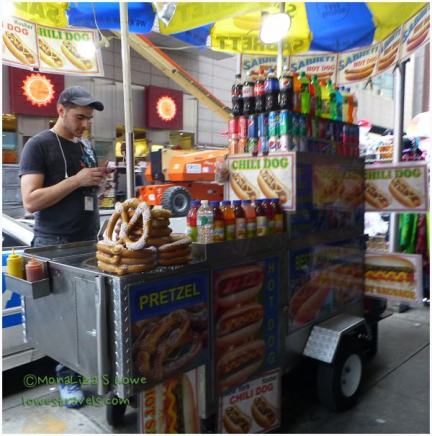 We strolled through Central Park and stopped at Strawberry Fields, a mosaic memorial for John Lennon. 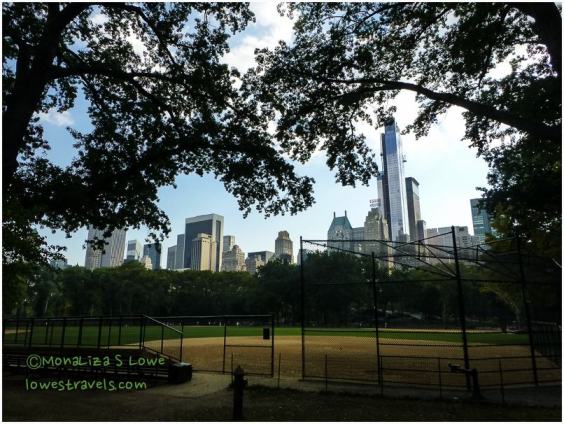 Dakota Building where Lennon was killed

We quickly learned that when taking the subway you need to know if you’re going uptown or downtown.  Knowing that, we hopped back on, this time heading downtown.  Emerging from the subway, we ended up at City Hall Park.  There we caught a glimpse of a live clown dressed in red and sleeping on one of the benches.  Strolling along, we learned that a group called “Lightness of Being,” had an outdoor show running till Dec. 13th, and it dotted the park with whimsical works of art.  They call it “concept-based art” (or stupid art).  Decide for yourself!

“Dog Days are over” – a live clown

“The Humans” – I’m the one with the little ears.

Our stop in The City That Never Sleeps was packed with activities – not only sightseeing, but also socializing.  We caught up with Joe and Charlene, whom we had met a few days ago in Boston, and Praveen, my former coworker at PayPal.  Also, we received a visit from my lovely niece Maristelle and her friend Christian.  Whew, we kept a pretty hectic schedule – just like you’re supposed to do when in New York City, right?  Help, we need a day off!!! 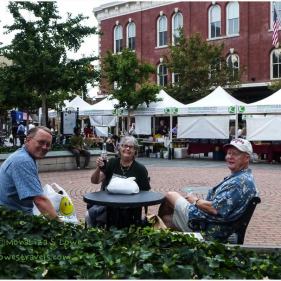 Hanging out with Praveen

We had a fantastic time in The Big Apple.  Despite the initial stress of driving Betsy  through NY and into NJ, we’re glad we decided to stay here for a few nights.  So much has been written about people in New York City, but we can now say from experience that the folks we observed and met on the streets were very helpful and tolerant of the tourists who raid their city on a daily basis.

Next Up:  Atlantic City!

Categories: New York, Where we have been