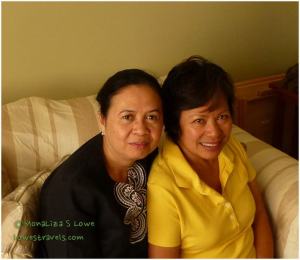 The next stop on our continuing trek south happened to land us in the smallest state in the union, Rhode Island.  While staying in the quaint coastal town of Narragansett, we met up with my friends Lea and Joanne.  They urged us to take a quick trip back into Massachusetts to visit Cape Cod.  Since we were staying only about an hour and a half from the Cape at Fisherman’s Memorial State Park in RI (click here to see Steve’s review), we said “what the heck, let’s go for it!”.

We took scenic route 6A from Bourne to Orleans, then continued on to 6 East all the way to Cape Cod National Seashore.  This was a pretty, scenic drive that led us over narrow and winding roads. The route where graced by  hundreds of historical homes which must conform to strictly enforced building codes and preservation efforts.  At the end of our long drive, a surprise awaited us – Marconi Beach!

Miles and miles of beauty at Marconi Beach.

A broad, sweeping view of the Atlantic Ocean can be enjoyed from atop an overlook on the steep sand cliff.  We saw miles of clay-colored cliffs and clean white beach.  Marconi is just one of several beaches along this stretch, referred to by Henry David Thoreau as “The Great Beach”.  We strolled along for a while, goofing off and taking in the fresh ocean air.  And the best part?  Since we were here at the end of September, only a handful of folks were around on this beautiful Sunday afternoon! 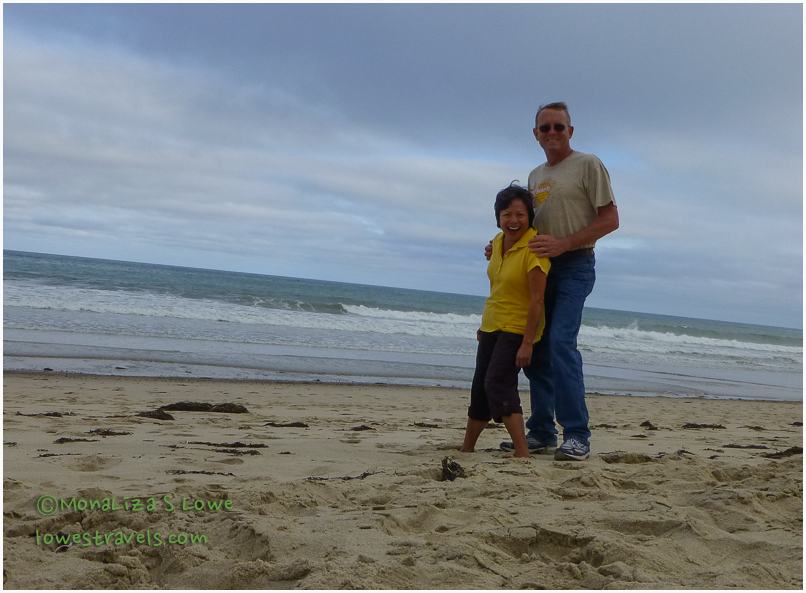 Just another day at the beach, we never get tired of this!

Now, back to Rhode Island.  As we arrived there, hints of autumn foliage could finally be seen along I-95S.

Less famous than Nantucket and Martha’s Vineyard of Massachusetts, Block Island sits 13 miles off the southern coast of Rhode Island.  At only 10 square miles in size, it’s a gem of a seaside resort.  Steve had heard of it in the past, but didn’t even know where it was until a few days before we arrived in the state. 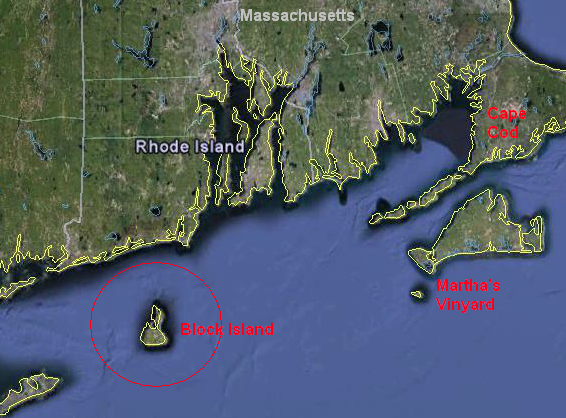 We learned that the entire perimenter of the 3-by-7 mile island can be best enjoyed on a bike.  Hey, we’re up for that!  A great reason to take down our bikes, catch a ferry to the island and spend the day riding around it.  And to make it even better, the weather just happened to be perfect.

There are two ways to access BI by ferry – catch the “high speed” which takes only 30 minutes to get across, or for a bit less money take the “traditional” ferry which is larger to accommodate vehicles and takes 55 minutes.  We did both, since the high speed ferry left earlier in the morning and the traditional ferry had an afternoon schedule that worked better for us.  They were both very efficient and easy to access. 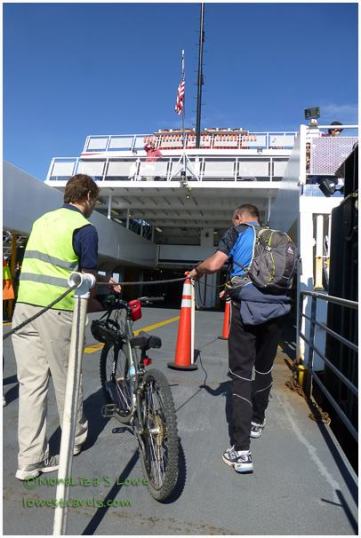 Getting on the Block Island ferry

While on the high speed ferry, we sat next to a couple – Susanne and Allan – who are regular visitors to the island.  They gave us lots of recommendations on what to see and where to eat as we biked around.  Since Allan is a pilot, he and Steve had a lot to talk about and before we knew it we were pulling into the harbor.  After getting our bikes, we headed toward the north end of the island.  There, at the end of the road, is a rock that marks the landing site of the European settlers on BI in 1661.

Further ahead and down the beach we could also see the Northern Light, the fourth lighthouse to inhabit the shifting sands of Block Island ‘s Sandy Point. 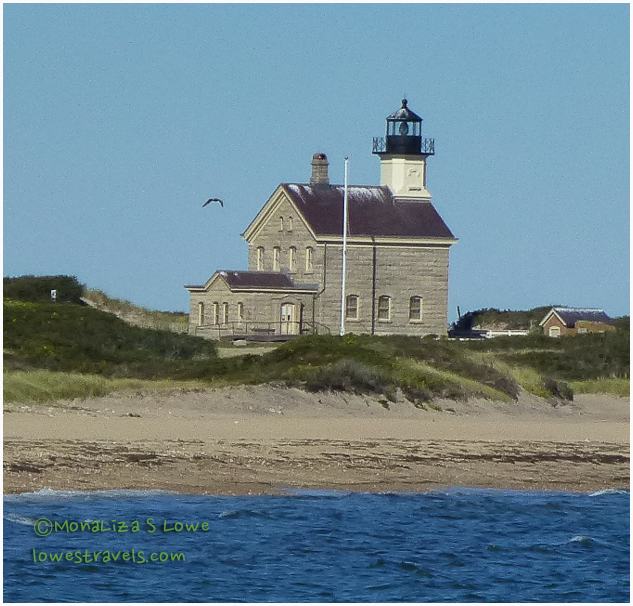 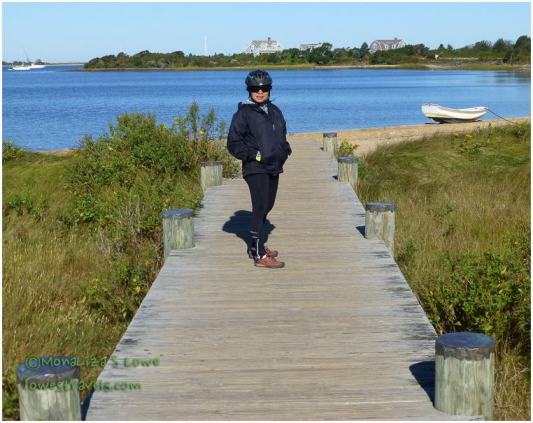 Retracing our path, we headed toward the south end of the island and stopped at Mohegan Bluffs.  The bluffs rise abruptly to a height of about 200 feet above the sea, and stretch for nearly three miles along the southern shore.  The beach can be accessed via 143 wooden steps, and yes, we went to the bottom and then huffed and puffed all the way back up to the top!

The most famous lighthouse on the island, which was relocated in the 1990’s due to beach erosion, is the South East Lighthouse.  This lighthouse has a large lens in its huge red brick beacon, and is now an National Historic Landmark.

Many renovated Victorian hotels built in the 1800’s reside at the heart of the village overlooking the Old Harbor.  These charming hotels feature full-service restaurants and provide comfortable lodging for folks who want to stay longer than a day. 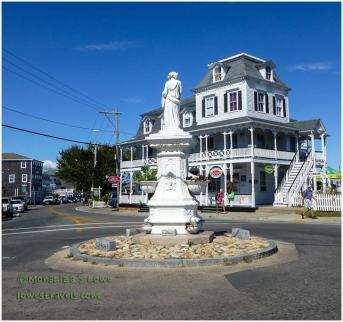 At the end of our long ride, a cold beer and tasty lunch at Ballard’s Beach capped the afternoon perfectly.

Block Island has incredibly varied and beautiful natural features, from the ocean to rolling hills.  Biking around the island is definitely the best way to enjoy it, and the number of folks doing just that proved it.  The bike route shares the road with other vehicles, and is varied with long flats intermingled with small hills and just a few fairly steep ones 😦  Because of its size, Block Island is billed as the smallest town in the smallest state of Rhode island.

But wait – our bike ride wasn’t over just yet.  Since our campground was only 1.5 miles from the harbor and there was a nice bike lane along the way, we decided to save the $8.00 parking fee and just ride there.  So, after the ferry docked back at Point Judith we still had a mile and a half to go.That last ride was a bit tough after riding all day and then sitting on the ferry, but it brought our total to a respectable 18.5 miles for the day. 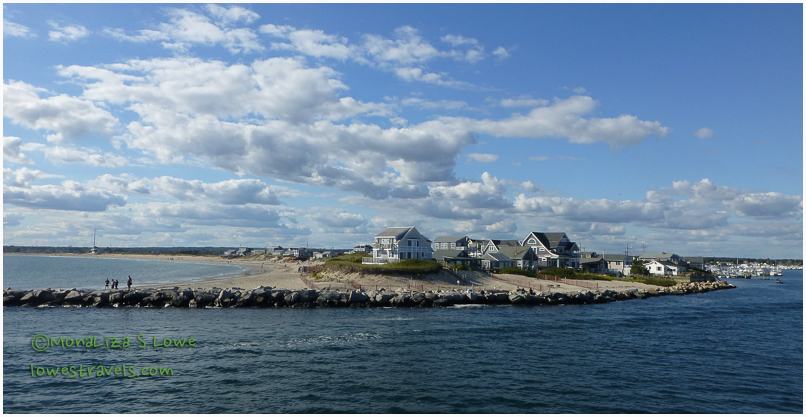 Approaching Narragansett on the ferry – the harbor is to the right and has several excellent seafood markets and restaurants.

We were beat when we arrived home, but we had a wonderful day on the island.  Not to be missed if you are in the area!

Betsy awaits us at our nice site at Fisherman’s Memorial State Park.

Categories: Massachusetts, Rhode Island, Where we have been