with Hans and Lisa

From Quartzsite we made a quick stop back at Casa Grande to do some of the mundane tasks of RV life after boondocking; flushing the black tank and doing laundry.  While there, we had a chance meeting with Hans and Lisa of  Metamorphosis Road, who recognized  me through my blog.  Isn’t blogging so cool!  Sharing our travel tales has connected us with so many like-minded RV travelers on the road.  To top it all, both Hans and Steve were in the Air Force at almost the same time during their younger days and  both worked in the Computer Operations field.  We definitely hope to meet up with these great folks again down the road.

We had heard a lot of good things about Patagonia Lake  State Park, which is tucked away in the rolling hills of southeastern Arizona.  It is about 150 miles southeast of Casa Grande and 60 miles southeast of Tucson, at an elevation of 3750′.  It took us about 2.5 hours to drive the beautiful highway 82 scenic route to get there.  The forecast going in was rain and wind over the next two days 😦

This park has been designated as an Important Birding Area by the Audubon Society – in short, we were going to see a lot of birds!  And that was the first thing I did by signing up for a bird walk tour – a mile-long walk on a flat area which lead down to the lake level where the birds are known to hang out.  Going with other birders, I learned a lot about birds in the region, like the fact that there are about three hundred varieties of birds known to live or migrate here.  The first bird I was introduced to was the Western Screech Owl.  If not for the guide we would have missed this little guy, comfortably perched and blending in with a tree trunk.

After three hours of gawking, peering into binoculars and identifying many birds, the group broke up a little disappointed, for we did not see the most exciting bird around, the Elegant Trogon.  This is the bird that lures many birdwatchers to come to southern Arizona just for a glimpse. 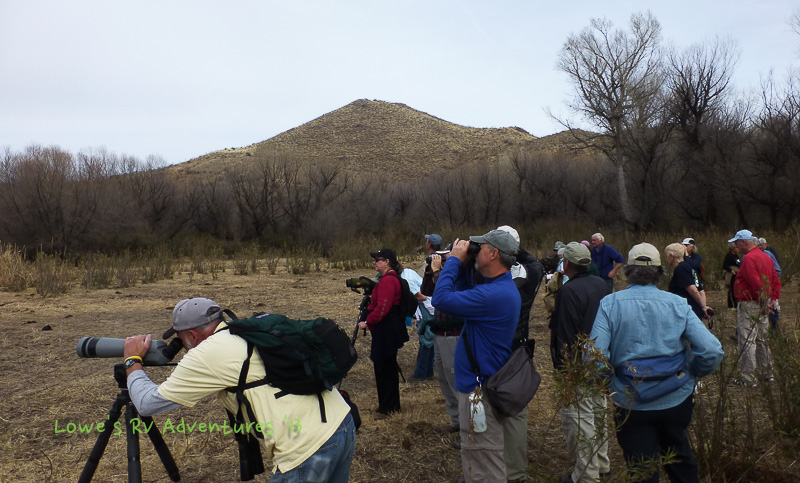 Its fun to be with a group of bird watchers

But I continued on my own and followed the creek with anticipation.  After half an hour my patience paid off,  for there it was along the creek perching quietly on a branch.  With its brilliant metallic colors – black throat, an iridescent green head, breast, and back, and a red belly – this bird is lovely to watch.  Isn’t he gorgeous?   Yes, in birdland the males are sexier and colorful than the females as shown below, the front and back of a male Elegant Trogon. 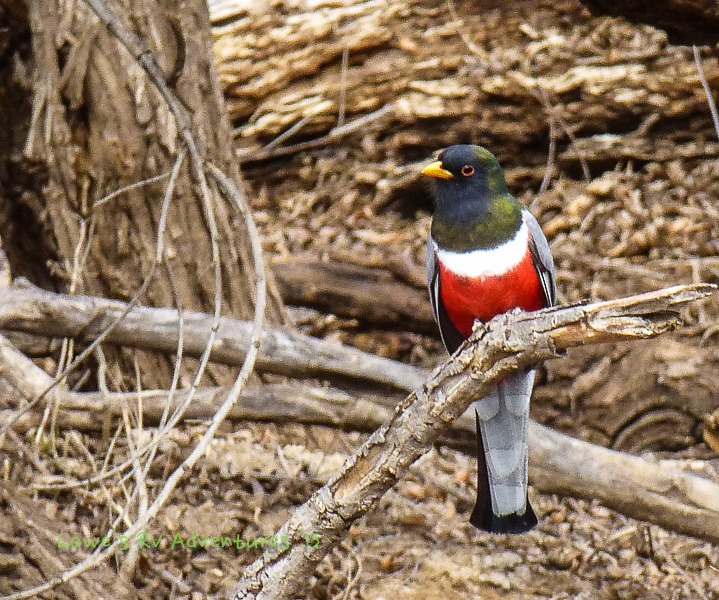 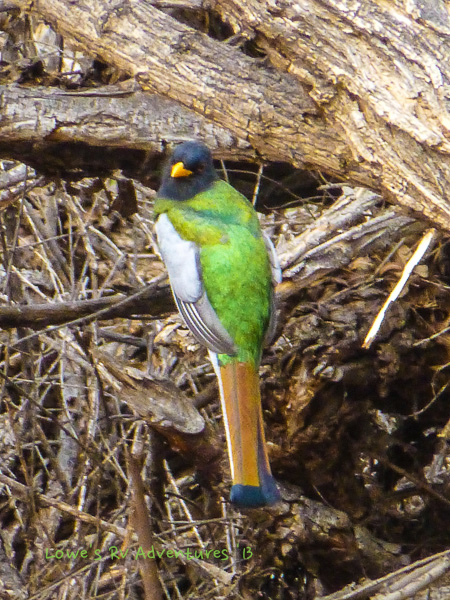 The back of the male Elegant Trogon

To see more of my other bird photos, click  here.

The day after my bird walk, the weather forecast of rain became a reality, for during the next two days it was pouring so we were housebound much of the time and made upcoming travel plans.  Even the scheduled Moonlight Hike was cancelled due to inclement weather.  Hmm, that would have been a first for us.

On the day of  our departure we had a watery surprise, a leak into one of our cabinets coming through the slide lock mechanism.  Well, that really made Steve’s morning.  It looked like water had pooled on top of the slide cover and then made its way through to the top of the slide where the lock mechanism resides.  Then it just came into the cabinet around the lock.  Steve went up to check the slide cover, and while trying to lift it he was rewarded with gallons of water right on his head.  OK, daily shower completed!  It looks like some sealing will have to be done up there, but we are just keeping an eye on it for now.

Water leak on the ceiling edge

Next up, our last stop in Arizona – Tombstone.

But wait here is one more stunning capture, breaking dawn at Casa Grande.